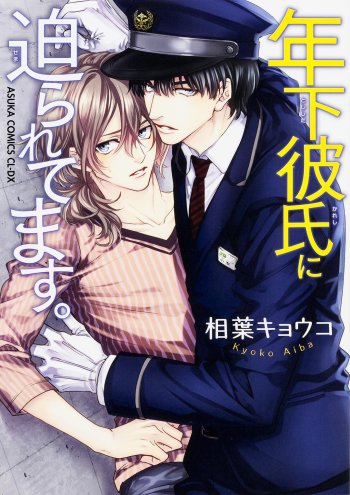 Mao loves his childhood friend, Riku. Even after becoming a university student, he commutes from home so he can be close to him. But he has a secret... every day, he's being groped on the train to school! He struggles as he's violated from behind, but his body secretly likes it...Who in the world will save Mao from this train of sexual desire?!

All aboard! This book is your ticket to seven romances - from confessions in Iriuda to proposals in Enoshima and all points in between. Beloved josei and boys love mangaka Asumiko Nakamura returns to the English market with a unique collection of romance shorts each set around the Kanagawa railway system, the Odakyu. Combining moments of yuri, shojo, josei and teen love, Maiden Railways is a ride to romance rarely seen in manga these days.

If you ride a train you can see there are a lot of different people. I wonder where they came from and where they are going. I've been able to hear many conversations and I wonder what kind of relationship these people have. I want to talk to them and ask, but I would be weird if I did so I just enjoy imagining it by myself.

Densha Otoko: The Story of the Train Man Who Fell in Love With a Girl

When a nerdy geek meets a girl on a train and he does not know how to talk to her, he posts an urgent query on the Internet, follows the advice that he is given, and keeps the Internet forum involved in every step of the relationship.

Kokoro is a young bureaucrat from a family of pedigree. To better prepare himself of becoming a politician, he decides to travel abroad with his father’s secretary, Maki. Will Kokoro reach his destination with Maki…!?

Exhausted from the office, Shuichi Takayama heads home for a good night's sleep. Unfortunately, his younger brother Toji has other ideas, stopping by unexpectedly in the middle of the night. Shuichi asks his brother to leave, but Toji's not alone. He's brought Hayato Asakura, a runaway he just met at the convenience store! Hayato decides to stay at the businessman's place indefinitely. No matter how hard Shuichi tries, he fails to convince the high schooler to leave. He later realizes he can't kick Hayato out after learning why he left home to begin with... Despite Hayato being somewhat mysterious, unusual and controlling - and 15 years younger - Shuichi decides to take him in! What will become of this 30-something workaholic and the mischievous young man who's wrapped around his little finger!?

The second son in a family of beauties, Naruse Shouta, is a world-famous hairstylist and model. He constantly showers affection over Ichii Hisashi, the grim but pure-hearted high school student who lives across the street. Due to his self-imposed "Under 18 is Prohibited" rule, Shouta has been impatiently waiting for Hisashi to grow up. However, none too soon, Hisashi's 18th birthday approaches...

A man who loves all things locomotive has a conversation with a train...