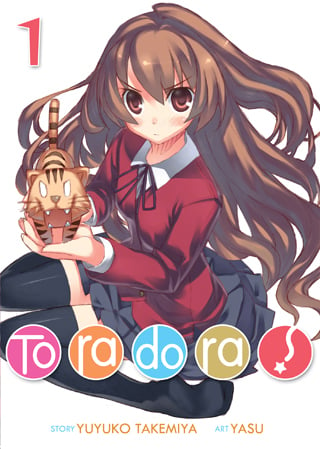 The main protagonist is Ryuuji Takasu. In school, he’s feared by his scary looking face. Despite having a scary face, he loves to clean and cook. His love for cleaning is so great that he even carries cleaning materials in his school locker. In the story, he has the conflict of not being able to control his life since his mother practically set up how she wants it to be. That’s supposed to be Ryuuji handling house chores and studying for school while the mom works. He wants to be more independent.

Taiga Aisaka is cute and small, but she’s actually a negative, bad-mouthed, violent girl. She’s actually a strong character who can go take on an opposing person head on; except for her crush…One of her features that aren’t well known is that she’s very clumsy. Her biggest conflict in the story is running away from problems she can’t handle. She acts on emotions and becomes a hard-to-fix mess.

Minori Kushieda is Taiga’s best friend and the girl whom Ryuuji likes. She’s like yang in the yin and yang relationship with Taiga as she’s a very positive person. She’s the type of person to go all out to make other people happy. She’s liked by Ryuuji because she appears to be bright like the sun and is constantly moving forward.

Yuusaku Kitamura is Ryuuji’s best friend and the boy whom Taiga likes. His character is that of a strong and charismatic leader. He’s somewhat similar to Minori to having such traits as having a positive attitude and making others happy.

Ami Kawashima really loves being in the spotlight and puts on a personality that will make those around her like her (with the exception of a few who can see right through her). She’s good at using people to her advantage, as well as figuring out what the other person’s intentions are.

The art is pretty good. The anime's art is better, but the art of the novel is cute, especially the designs for the girls. In each chapter, there's a picture that brings out the best out of a scene it's used for.

If you like romance, give Toradora a try. It’s really an amazing story. At four different parts I had watery eyes. But in the anime, I only had it one time. I watched the anime first and loved it, but later I read the novel and came to love it better than the anime.