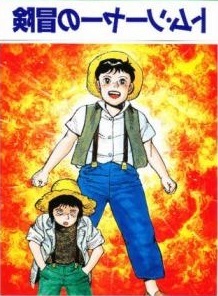 A Man of the Land

Zach Masterson can’t believe his ears. Not only does Sarah not know what a credit card is, she has never even gone shopping before! Sarah Solomon was found camping alone on Zach’s ranch. She is a beautiful yet peculiar woman who was born and raised in a community with century-old religious views and lifestyles. After losing her mother, she fled from her abusive stepfather and discovered the outside world for the first time. Despite her worries, Sarah remains hopeful in her search for a place where she truly belongs. Zach, on the other hand, is ashamed of his roots and on the verge of abandoning the place he once called home.

When cheerful orphan Pollyanna comes to live with her strict Aunt Polly, Pollyanna's unyielding optimism lifts the hearts of everyone around her.

The Last of the Mohicans

Sugiura Shigeru (1908–2000) is widely regarded as one of the masters of Japanese comics. His 1953 adaptation of James Fenimore Cooper’s The Last of the Mohicans sold over 60,000 copies, quickly establishing him as one of the most sought-after children’s manga artists of the 50s. His popularity had faded by the mid-60s, but he made a comeback later in the decade with a number of highly surrealistic, collage-like works, and he chose to rework Mohicans in this new style in 1974. Considered a masterpiece of postwar manga, The Last of the Mohicans is as beautiful to look at as it is a delight to read.

Based on the novel The Great Gatsby by F. Scott Fitzgerald.

Deep in the gorgeous Missouri countryside stands the Hotel Crosby, run by former lawyer Elissa. Having lost her parents at a young age, protecting her two sisters and their quaint hotel is everything to Elissa. However, those peaceful days come to an end with the arrival of a man gripping the deed to the land. Sporting jet black hair and an assertive demeanor, he tells Elissa she has until next Spring to vacate the premises so he can build a golf course on the land. The hotel means the world to Elissa, and she's not about to let some man destroy her happiness without a fight.

Ever since Pollyanna was accidentally sent a pair of crutches instead of a doll, the little girl has learned to be glad about everything. (Her father told her to be glad she didn't need the crutches) Her "Glad Game" encourages those around her to try and be grateful for their own blessings. When Pollyanna is sent to live with her cold Aunt Polly, her optimistic enthusiasm faces its biggest challenge yet- Aunt Polly doesn't see ANYTHING to be glad about!