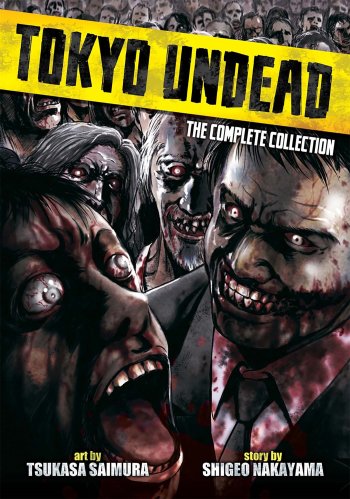 As the zombie apocalypse begins in Osaka, chaos descends on the city. Kozue and her friend Yuuko arrive on a flight to Shin Kansai International Airport, only to discover the facility is overrun with the dead and they can't leave the aircraft. Meanwhile, Kozue's lover Tatsuo is in the midst of the carnage downtown. Will the two manage to reunite, let alone survive through the night?

The world has come to chaos. An unknown virus haunts every living soul, and one man is determined to reach his beloved before it's too late. His journey takes him closer and closer, but he faces adversity and strife. That's when he faces reality. He sees the world around him. He sees a world faced with something more dangerous than the virus.

Beginning on the 4th day after a zombie virus broke out, this is a story about the will to live, human instincts and our selfish desires. A thrilling tale about the survivors of a zombie apocalypse.

A new infection has spread around the planet, that turns people into undead. The story begins a few minutes before the first recorded case, and shows the struggle of six young to survive this new world.

In a zombie apocalypse, he looks for a perfect death in the arms of a beautiful zombie girl...

I Am a Hero in Nagasaki

The zombie apocalypse has spread to Nagasaki, where the cowardly Yamada would have died if the athletic Aya Nirei hadn't saved him with her archery skills. As the city has been overrun, they make their way to Gunkanjima to escape. But the pair didn't realize that a naked man named Kagawa stands at attention at the dock, and they'll need to work alongside his member(s) to survive.

Takashi Nagasawa wishes he could once more be a typical high school student. For after being bitten by a rat in the science lab, he discovers he's become infected with Nightshift, a disease that turns its host into a zombie. As the infection is still a mystery, Takashi finds himself under the close scrutiny of a shady doctor who instructs him to hunt down others that have completely turned, so that his friends and loved ones can remain safe from harm. Takashi must now try to balance his school life, a budding crush with his classmate Kyouko, and must try to survive his affliction, all the while doing the biddings of the mysterious doctor.