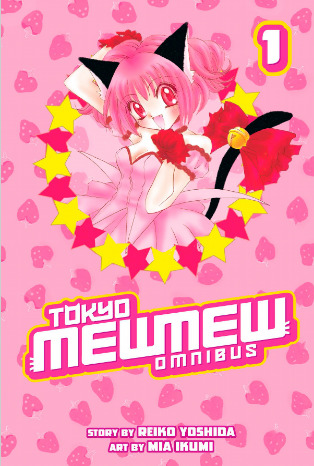 Premise: Five teenage girls have their DNA mixed with that of endangered species and gain their powers. Together, the girls fight to protect humanity, love, and mew aqua from a group of aliens who ruined their own world.

Magical Girls: I like these powers. Cat, bird, wolf, porpoise, and monkey- they aren’t mind blowing choices or anything, but it makes you wonder what powers your favorite animal would give you. A simple internet search will show you how many imaginations have been captured by this alone.

Enemies: They are mostly likeable, and not terribly serious. After all, if two of them end up as potential love interests for the mews, then they can’t be THAT evil.

Environmental Messages: They aren’t pronounced enough to be obnoxious, but Tokyo Mew Mew really does want you to protect endangered species. (The heroines have their powers! Look how cool they are! Save the planet! Yay!)

Overall: Tokyo Mew Mew is a pretty solid magical girl manga. It doesn’t deviate much from the standard formula, but at least it follows it well. If you just want a light-hearted mahou shoujo romp without any real surprises, try this series.

This is actually a really cute manga. It’s the basic magical girl with a little underlining factor of endangered species. It’s not a bad mix actually in that the characters all have characteristics of the species but sadly it ends there. The girls don’t have attacks that symbolize the animals they were injected with and the colors also don’t feel like they make the cut. For a show that keeps talking about the characters given power from endangered species, they should have put a little more into it. Now that doesn’t mean that I didn’t like the manga. The characters are loveable; the names actually are rather remember-able (although I don’t understand why someone would call their child lettuce or mint of all things. Must be better in Japanese), and the storyline is pretty cool to get into. You do get to a point where you are wondering just who the bad guy is but if I explain why, I would be spoiling things. When the girls are together, they act just like a regular group of friends and seem to have even more chemistry then even the Sailor Scouts from Sailor Moon. It reminds the reader that even though they have been given super powers, it doesn’t mean they aren’t normal girls and won’t use their power for personal gain. I can only wish that some of the drama was taken out so that we could see more of the characters. It circles a lot around Ichigo and I would have liked to see more of the other girls too. The drama with Ichigo and the ‘love triangle’ just gets over used at times.

The artwork was rather cutesy but in a way, I liked it better then some of the older manga’s I read where magical girls were involved. The designs of the girls clothing are out of this world and show off a cute style while still playing to the sexy in a way. The strokes are fluid throughout the manga books, and the way it’s laid out is rather perfect for the action that is placed in it.

Story: There was an attempt for a decent plot but I don't it quite came through. I'm a big fan of magical girl but I didn't like this at all. The pacing felt really fast and not quite developed enough. Conflicts seemed to be resolved incredibly quickly without too much explanations. The ending was frankly ridiculous. It was cliche and over-the-top. There was romance but I felt that it was shallow so it just annoyed me. It just seemed to full of fluff. I do acknowledge that there were plot twists and surprises but they were borderline melodramatic. However, overall, it just didn't cut it for me. At least, it was short so you don't have to suffer for too long.

Art; Over the top. It's just too much sparkles, hearts, and blush lines. The panels seemed way too packed that you just want to glaze over it. The costumes just seem way too mature for the demographic and for the age of the girls. Eyes are huge and their overall appearance is not too attractive. The backgrounds are subpar. Overall, the art was pretty mediocre.

Characters: Annoying especially Ichigo. They don't make really good decisions and their saving grace is that they have friendship and kindness. However, that can only cover so much. For the most part, I was just irritated with them. I'll cut down the ranting and leave to I just didn't like them and it's not hard to see why. I will admit that their is development but for most the characters, it felt too rushed. For others, it didn't make much sense. Frankly, there not really likable.

Overall: There is so many better magical series out there that I wouldn't waste my time on this one. If you don't care about mediocre art, shallow love, melodramatic twists and annoying people, you'll probably be willing to put up with this. I'm wondering why I did.