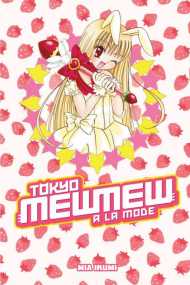 Berry Shirayuki is a completely normal high school girl—until she's hit by the Mew Mew beam, giving her the powers of both the Amami Black Rabbit and the Andean Mountain Cat! Now Berry has super-hearing, super-speed, and can leap (small) builings in a single bound. But her new super powers come at a price. With their leader Ichigo studying abroad in England, the Mew Mews need Berry's help fighting the remaining chimera terrorizing Tokyo. As if that wasn't bad enough, there's a new gang in town, the Saint Rose Crusaders. They've made it their mission to destroy the Mew Mews, and they're starting with Berry!

Story: When I heard there was a sequel of Tokyo Mew Mew, I was ecstatic- I soon got down to reading it in the hope that it would live up to its predecessors name and bring a whole new level of Mahou-Shoujo out onto the surface for all to see. But sadly, I was badly dissapointed... The story itself was a mildly interesting concept at first- A Mew Mew is created accidentally with an infusion of TWO animals instead of the usual one. But that, I'm sorry to say, is the only interesting point of this manga, the storyline only goes downhill till, when it gets to the end, it becomes ABYSMAL. Without exaggeration, TMM A La Mode easily had the worst ending of any manga or anime I have ever seen or read. The aliens have almost taken over the Earth, and then they suddenly stop and go back to their planet; and why? Because the main character and her crush hold hands. Seriously- that was it. It was awful. It was like Mia Ikumi was writing, then she suddenlly realised she was late for her afternoon cup of tea so she hurriedly thought up any ending possible. Art: The art was the only good point of this series, typical Mia Ikumi it is cute, fluffsey and beautiful. Perhaps there were a little too many sparkles and whatnot on the pages, they could look rather overwhelming at times, but can't all Shoujo's be a bit over the top in terms of artwork? Its what their readers like, after all. Characters: This was another downfall of this series for multiple reasons: Problem One: Ichigo. The main character from the original TMM was studying abroad with her boyfriend Masaya in England- I wouldn't have minded this, it was a fresh take on TMM without the main protagonist being present, but the character that replaced her was so ming-bogglingly awful that it made me miss Ichigo like you'd miss water when stranded in a desert. Problem Two: Berry. The new character of Berry did nothing but get on my nerves. She stole all the page time and had no reedeeming qualities whatsoever. She was absolutely bland, with almost no personality to speak of- a bad choice for the new main protagonist. Problem Three: Where are the other characters? As aforementioned, Berry stole ALL of the page time, so all the other characters were simply tossed aside carelessly. The other Mew Mews were given about 2 pages in each volume where they just fought monsters- they hardly ever said a word and you forgot they were there most of the time- they might as well have joined Ichigo and Masaya in England. Ryou was shown briefly, but other than him and Berry's irritating crush there was no one but Berry shown in the whole series. Overall: Don't get your hopes up for this series- the first volume may show promise, but what little potential it had got pounded out when volume 2 came along. I wouldn't recommend this series unless you're a big TMM fan who wants to read a sequel, no matter how bad it is.

Thoughts: When i found out there was a sequel to Tokyo Mew Mew, was about three years ago, just after I finished reading the original series, but I haven't gotten a chence to read it, until now. Oh, and the was the WORST MISTAKE EVER. It was just really bad. Story: The story was very undeveloped and short. The whole idea of this second series was very, very pointless. First, to find out that Ichigo went to England with Masaya, well, that actually wasn't so bad. Next was to find a new mew? Like, what is that? You just CANNOT just get a new freaking mew, it's just not done. And to find out that she is the new leader and has two red data animal's DNA!? It's just so ridiculious. And there is this new group of villians, the Saint Rose Crusaders, try to take over the Earth and then they just stop, because stupid Mew Berry got together with her 'true love'. It was too short and little miss Mew Berry took was on like every single page and the other characters just didn't get a chance to shine. Art: Actually, like always, Mia Ikumi delivered her really cute, adorable style. The art is actually the only decent thing in this very short sequel to Tokyo Mew Mew. But still, Mew Berry was a story-hog, or at least that's what I call her Characters: The characters were actually another pretty decent thing. All except for Mew Berry and her lover, T-whatever-his-name-is. You get the classics, Mew Ichigo, Mew Mint, Mew Zakuro, Mew Lettuce and Mew Pudding with Ryou, Akasaka and Masaya, which made it okay, I guess, but they weren't really part of the story so... Overall: Overall, I think that reading this was just a total waste of time and a joy killer. The story was very undeveloped, the characters (the new ones) were very annoying and the only good thing was the art, thus my very low rating of 2/10 for this review and 0.5/5 stars (actually it should be 0/5 if you could do that without it being counted as 'unrated'). This is a comlete waste of time and I do not suggest reading it. 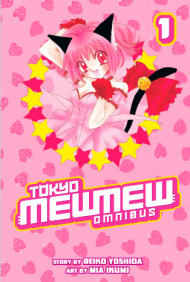 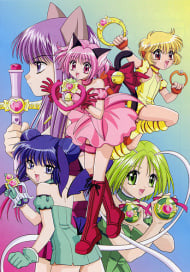