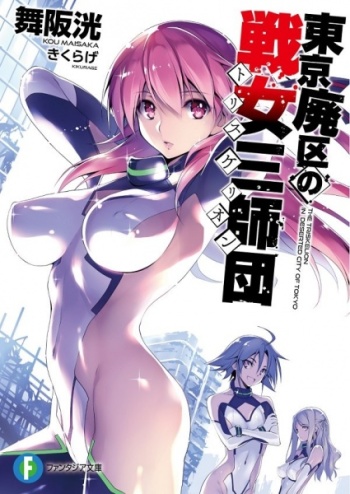 If you're looking for manga similar to Tokyo Haiku no Triskelion (Light Novel), you might like these titles.

The world is terrorized by the powerful Black Witch who has been sealed in the moon. Every ten years, the night of Hexennacht arrives and a chosen witch must battle the Black Witch in hopes of finally defeating her. As the current decade's Hexennacht approaches, a mysterious girl named Kagami Kagami arrives and meets Horinouchi Mitsuru, the daughter of the previous Hexennacht representative.

In a world of science, sorcery is rediscovered and rapidly adopted in all areas of industry – but at a high price: an invisible pollution is spreading out across the world. Those who do not take proper precautions become infected, lose their sanity, and become demons. The Sorcery Administration Bureau, along with their Tactical Sorcerers, monitor magic uses and respond to any demonic outbreaks that occur. In this world, Ray Otto is a rogue tactical sorcerer who hunts down demons with reckless abandon. Given that he always gets the job done, the administration generally lets his activities slide. Together with the mysterious girl Kapel Theta, Ray risks his life and humanity to destroy demonkind... when the price is right.

A collection of four short stories and manga from Toaru Majutsu no Index & Toaru Kagaku no Railgun, previously only seen limited release. A single mission is given to Stiyl by the Anglican Church's Necessarius. When Stiyl arrives in Academy City once more, his way is blocked by Theodosia Electra, a fellow member of Necessarius. The reason she is fighting with Stiyl lies with a girl named Patricia Birdway. A battle between magicians over the techniques of the Dvergr from Norse mythology begins.

The world consists of a mix of science and magic. Here, you'll find the most prominent college town on the science side, which teaches ESP as a curriculum. In this town, of which 80% of the population is said to consist of students, the season where residents are both cheerful and restless has come... It's Christmas Eve! And amongst the cheerful hustle and bustle of the town, even Touma Kamijou - an average slacker - doesn't plan on missing this event! He had long been grueling away at his supplementary lessons, after all... But in the midst of this unusually cheerful scene, Sister Index - a silver-haired freeloader who's staying at his dorm - glances over at this guy who's predisposed to misfortune, and a new gluttony skill activates?! Under the condition of desperately trying to stop it, even Mikoto Misaka - who had been taken in by the Christmas Eve atmosphere - appears... Thus the curtain rises on the busy "Genesis Testament"!

The Third World War has been ended by the efforts of Kamijou Touma. With that, he vanished. With the Magic Side regrouping, the Sabbath for their followers has arrived.In the headquarters of the Science Side, Academy City's strongest Level 5 Esper Accelerator has washed his hands off the "Darkness." Along with Last Order and Misaka Worst, his days pass by peacefully with no sign of GROUP. Hamazura Shiage has formed a new ITEM with Kinuhata, Takitsubo and Mugino. Peace has come to the hands of the alumni who have "graduated" from Academy's Dark Side at last... at least until a new evil "first year student" appears before them.

In Academy City, there is a popular next-generation contest. In reality, this is a hand-to-hand battle between gigantic Virtuaroids that appear on the streets. It’s formally called as “Computerized War Machine Virtual-On”. Since it can be argued that Level 5s and Level 0s are equal given the technique, it has spread with explosive force among the students of Academy City. One day, Index with her white Bal Bados, fights Touma’s stock Temjin. “I’m Ririn. Purajina Ririn. I’m not Ririna… Munya…” A seemingly insomniac girl arrives at Academy City. And, Kamijou has an encounter. The usual Virtual-On meets an unavoidable unprecedented accident. That is, the Computerized War Machines fuse with Academy City, a sign of a grand battle about to happen! Misaka Mikoto and her Raiden, Shokuhou Misaki and her Angelan, as well as many others will make appearances!