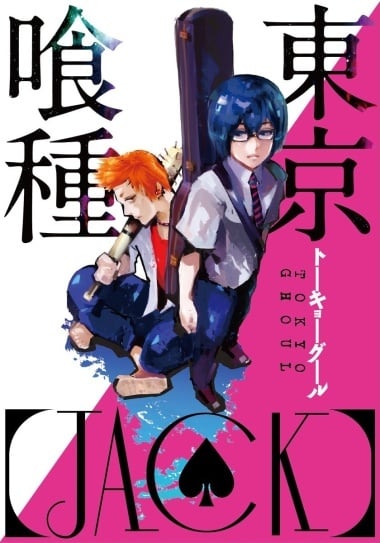 Tokyo Ghoul – JACK is a spin-off of the now well-known Tokyo Ghoul series, centered around the character of Arima Kishou.

The story is not very long, and simply revolves around two characters teaming up in order to find and eliminate a certain ghoul. While it is pretty basic, it still manages to be interesting, and doesn't really need to be more than that.

More than using its characters to tell a story, Tokyo Ghoul – JACK uses a story to show its characters, and especially to try to reveal more about Arima's character. He Fura Taishi, the other main character, contrast each other in almost every way, and have a nice dynamic going on between them.

The art is very simple and rough, with only a few panels being given more details. While this might displease some people, the drawing in itself isn't bad, and the lightness that comes from it can actually give the story a particular atmosphere. This is also reinforced by the colours used, wich are mostly greyish blues and browns.

It is doubtful that people who have watched the Tokyo Ghoul anime but not read the manga will find this spin-off interesting, due to the fact that Arima never really got a proper introduction in the anime. However, for those who wish to know more about him, Tokyo Ghoul – JACK should prove to be enjoyable and satisfy your curiosity.