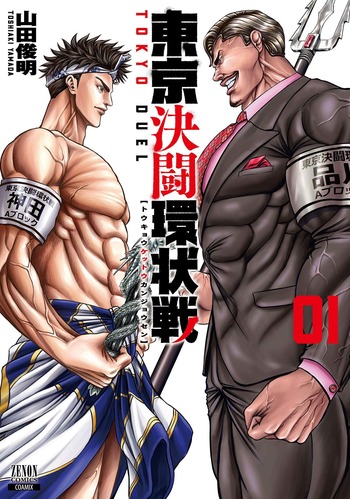 Humanity’s greatest heroes battle the gods for the survival of the human race! Once every millennium, the gods assemble to decide if humanity is worthy of its continued existence or if it should be destroyed! When the verdict is destruction, the final battle between the gods and mortal heroes will decide the survival or extinction of the human race—a battle known as Ragnarok! The Valkyrie Brunhilde has convinced the gods to give humanity a chance at redemption through combat in the Valhalla arena. Seeking a quick end to the proceedings, the gods present their first fighter: Thor, the Norse god of thunder. Facing him is a warrior said to be the strongest in the history of mankind, the legendary general Lü Bu!

Aaah, peaceful life is boring. After the battles of the first series, Joukyuu has to stay quiet in Japan teaching martial arts. Even with Veronica and Kageyasu close by, it is so sleepy. Then when a chef offers him a quick trip to US to mess with their gangs, in return for great Japanese food, he jumps at the chance. Dragging both girls with him, along with Bull for good measure, he arrives in America like a typhoon. Will they survive his entry?

The year is 2028, location in New Koshigaya. A young boy, Isurugi Neru, lives in a poor family and is forced to quit school so that he can find his own way in life. Neru on the other hand, only thinks of one thing: to take revenge on Yagami, a classmate, who's especially gifted and has humiliated Neru numerous times.