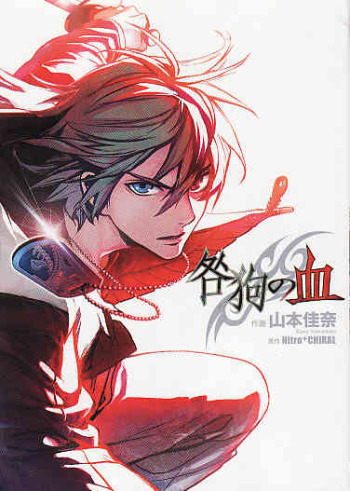 If you're looking for manga similar to Togainu no Chi (Kana YAMAMOTO), you might like these titles.

An unknowing Sudou Kaname is invited to try out a new mysterious mobile app game called "Darwin's Game", but later realizes that he's in for more than he's bargained for when he finds out that there's no way to "quit" the game.

He awoke in a cold and rustic room. There were only a door and torture devices inside of it. While he could not yet grasp the situation, a number rose to the surface on the back of his right hand. "I know your pain." The young man figured out that pain and the door were linked, and so he could only endure his own suffering.

He has never been the type to stand out in the class. Kurihara Yuzuru has lived life by avoiding entering the lives of others, staying to himself. The story begins where he has to go to a whole new school, which means new classmates. He lacks any confidence to make new friends, so the fear of rejection drives him into a wish he never thought he would make. This single wish leads to a first day of class he would never forget. Yuzuru will have to make choices that will significantly alter others' lives, choices he could never make in the past.

Each year, the elite Hope’s Peak Academy selects only the most gifted and talented students to enroll... plus one ordinary student, chosen by lottery. Makoto Naegi was that lucky person — or so he thought! When he shows up for class, he finds the elite students are a bizarre cast of oddballs under the ruthless authority of a robot teddy bear principal, Monokuma. The bear lays down the school rules: the only way out of Hope’s Peak is to not only murder another student... but get away with it, as every murder is followed by a tribunal where the surviving students cross-examine each other!

A manga adaptation of the drama CD, Steins;Gate: Aishin Meizu no Babel, told from Kurisu's perspective.

The story takes place many years in the future where the game "Rhyme", a virtual fighting game, is incredibly popular and people posses "All Mates", convenient AI computers. Aoba leads an ordinary life, working at a junk shop and living with his grandmother on the Island of Midori Jima. Unlike his friends, he doesn't participate in Rhyme, nor does he belong in a gang. However, when rumors of people disappearing spread, Aoba finds himself needing to unravel the mysteries behind the island in order to protect his everyday life.

Makoto Hashimoto is unlucky – so unlucky that she's scared she'll cause her entire class to be nominated for the horrific game The Program, even though all of the participating teams have already been chosen for the year. However, when she and the group embark on a field trip, they soon find themselves in the middle of an even deadlier scenario. Forced to attend 'Defense School', they must survive attacks and the wrath of each other – not to mention the exploding collars around their necks - to graduate. Can Makoto and her classmates survive a day, let alone the time it takes to graduate?