Tobari of the Dawn - Recommendations

Alt titles: Ake no Tobari, Phantom of the Night 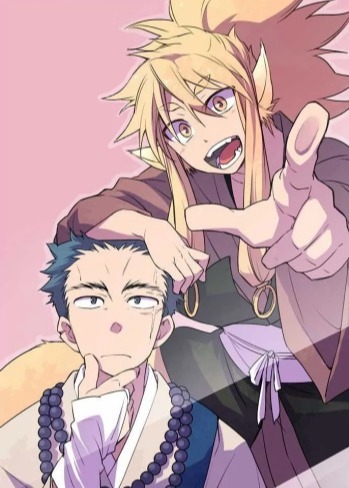 both want a peace between the Human and the monster/ yokai race.

both head/ lords are loved by their subservient.

Yasuke, the boy who lives with Satama's youth parent, Chiya, and his long-haired father. Depicts the growth of Yasuke who has been entrusted with a youkai child that may be dangerous for humans!

One day schoolgirl Kuju Ritsu breaks a seal at a shrine that is keeping a yokai trapped. The beast was sealed away by the girls ancestors for eating humans. He promises he wont eat humans as long as he can get energy from Ritsu...by kissing her.

A Buddhist priest, Sogen is traveling with a spider-spirit he is intimate with. He can’t get enough of Kinki sex with the spider. Sogen has never been afraid of spirits or demons, compared with the cruelty of humans. That’s why without realizing it he grows to love the faithful spider. He worries what will happen to the spider after he dies…

Fushimi and Toume were just a normal boy and girl going to high school until one day they stumble upon a phantasmal mountain known as "Mount Hagure" . Before either of them knew it, Toume was possessed by a yōkai named Dakini, a goddess that grants wishes. When Fushimi is asked what he wishes for, his response is: Give Toume back. Dakini says she can grant the wish but in return he must become her servant. The deal is struck. Fushimi has now become Dakini's servant and Toume has been returned. Darkness, however, is afoot and now Fushimi must take on a more active role as Dakini's servant. Is he up for the task?

When Midou Ginnosuke lost both parents at the age of ten, his grandmother decides to take him in. He goes to live with her and her pet cat, Anzu. Life was peaceful for a time and all was right with the world, until he wakes up one morning and discovers that the girl with cat ears lying beside him is none other than Anzu, who has transformed into a nekomata (two-tailed monster cat).