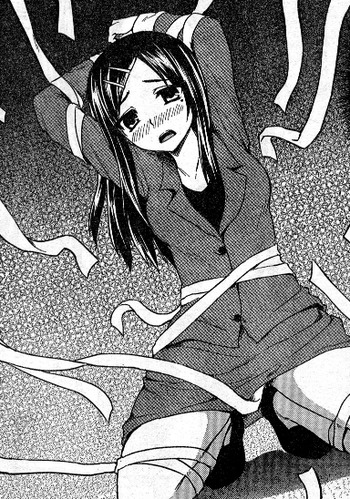 Public sexual fantasies lead to Kasai Rena going a bit too far while at work. Since the sexual encounters all occur within her daydreams, they don't have any weight or context behind them and they're also very short (often just consisting of a single image of her getting groped by tentacles)--all of which means that they're not very engaging or enticing. There's the potential for drama based on the fact that she's fantasizing while at work (which means she could get caught), but the manga doesn't actually play into that potential, so all of the non-fantasy aspects are basically pointless. It's not a worthwhile read.

Story: There is literally no story here. I would give this a 0 if I could, but I can't so it just gets a 1. The MC has a tentacle fetish and just looks at random office objects, fantasizing about them turning into tentacles and doing lewd things. There's no progression, no development, and no plot. Just a bunch of random and disconnected panels of her in different circumstances throughout her office building.

Art: Moderately decent. A good level of detail on things, and proportions are well handled. Nothing spectacular though.

Characters: There's only the MC, and her character is so 1-dimensional it's not even funny. She has literally 1 personality trait, and that's her tentacle fetish. She doesn't do anything else, say anythingelse, or otherwise betray any other possible personality - all she does is look at vaguely noodle-y objects like power cords or shredded paper, and imagine them as tentacles that entagle her and do lewd things.

The woman likes tentacles and can get visions of them from anything that looks the slightest bit like a tentacle. That's all there is to this manga, the most obscure one I've read and deservedly so.