To Take an Enemy's Heart - Reviews 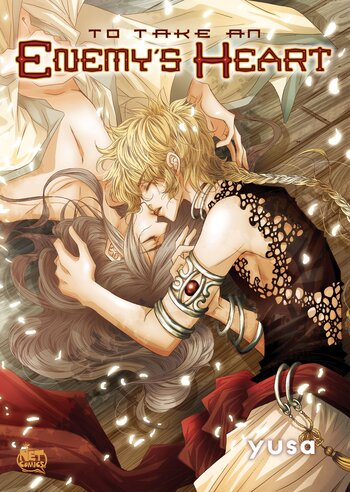 The first thing that comes to my mind is the internal musings of the main characters.. It was so heart felt and touching and beautiful. The plot was well thought out and I loved Igen so much(I just have a tinsy but problem with all characters extravagant hair.. But to all their own).

The story has a rocking start and beautiful end. I loved how the characters were so enamoured with each other that there was no one between them.

I felt awful at the start for kassen but it came out well. The minor characters were very thought out as well. There was no gap in the story. So no dull moment.

I cried a few times. Laughed many times. Lastly, I'm glad I got a chance to read this. So,..... A big thank you to the author! I will definitely read her other stories.. If there are..

This historical yaoi is beautiful from the characters, costume designs, soap drama, to the copious sex scenes that is just plain magnifique *muah*.

LOVE TRANSCENDS HATE and Igen's long-held vindictive desire towards the Azukun clan only melts away after spending time with Kasan, one of the last two surviving Azukus (the other being his evilass brother). The two didn't start off well, there were literal stabbings, distrusts, and threats that arose between them. It made sense & all since they're both sworn enemies, this cycle of revenge began the day Kasan's father committed acts of unforgivable douchebaggery against Igen's family. Kasan just happened to be born to that shitty family hence he was subjected to endless scorns from Igen's clan and his father's victims. Igen came to love Kasan after his distrusts for him gets dispelled, the feeling were mutual plus Kasan was the one who confessed first which got Igen's vanity rolling lmao.

Igen has that typical seme demeanour like the pink top from the author's other work "good day to go crazy", regardless it's pleasing to watch him tease and fondle Kasan lol. Kasan on the other hand is uuuuhmm submissive, both in a good & bad way. He can push Igen out the door even before their relationship took off, refuse Caesar's poison coz of his will to survive, and grab a fucking dagger also yet still end up as a damsel for most parts 👏👏. For real tho, he ends up a hostage every time in the story it's kinda suffocating to watch him go thru all that... got whipped,  poisoned, got shot, what else lol... u go figure. Aside from his gullible disposition that's really all he's been used for, could benefit from lessons on how to be a badass uke from the likes of SiYeon (penthouse XXX) and MinHoon (the sweetest man). Nonetheless, their loving embrace is to die for. The tragic-induced, enemy-to-lovers type shit made this one of my fav yaoi so far.

This story line is absoutly amazing! If your into master-servent type of reatloinship with a deep back story to the characters then you will love this manhwa. Its similar to a more popular master-servant story line "royal blood." I highly reccomened this master peice! <3

This story was so entertaining and just lovely. If you like sex, romance, and blind love and loyalty, this is great for you. Definitely will read anything from this author.