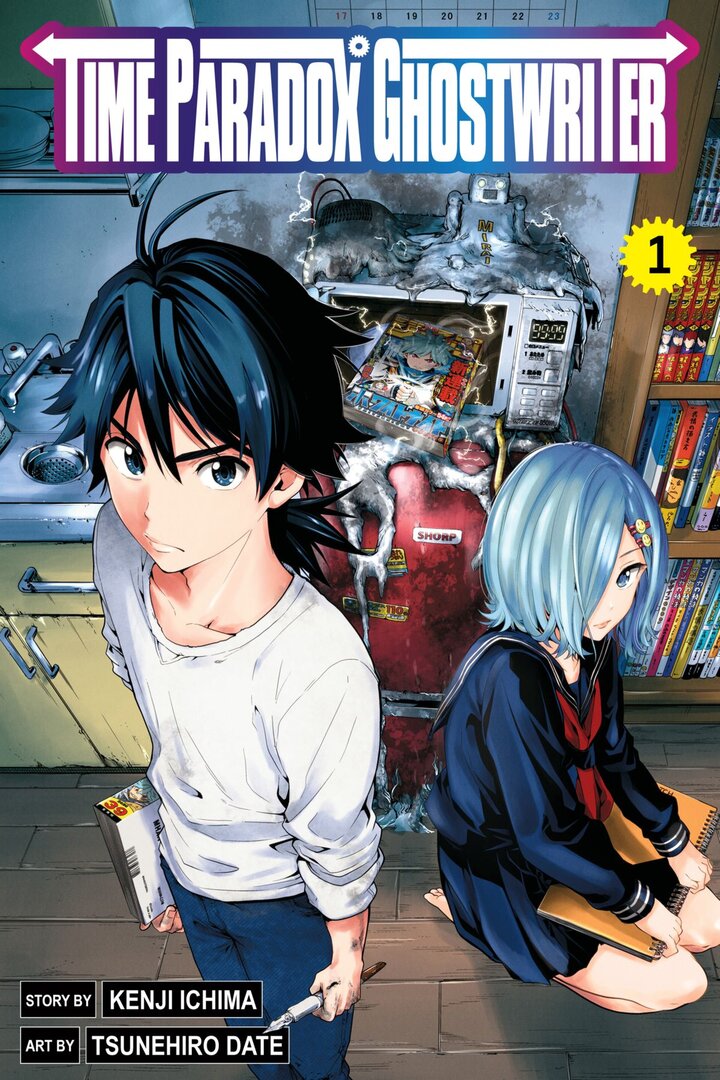 Both series deal with mangaka writing series for Shonen Jump. While Time Paradox Ghostwriter does have sci-fi elements in its base story, Bakuman. is more grounded in reality.

Saitou, an editor at Weekly Shounen Jump is tired of his work, tired of being forced to work like a slave while receiving a small salary. He decides to be a Mangaka and dreams of getting rich quick. Then he looks for Murata Yuusuke, Mangaka of "Eyeshield 21," and threatens him and gets him to teach him how to draw manga. Murata starts with the description of the basic tools, tips on how to draw a face, body, girl, etc. They also receive special guests as lecturers, like Kawashita Mizuki (Ichigo 100%), Matsui Yuusei (Nougami Neuro), and Shimabukuro Mitsutoshi (Toriko).

The Right Way to Make Jump

Join a self-professed inept manga artist and his editor as they go on an adventure to learn just how Weekly Shonen Jump is made. Shonen Jump is the world’s most popular manga magazine and the birthplace of classics like Dragon Ball, Naruto and One Piece. But how did it become so successful? This duo will visit the editorial office, the printer, the paper supplier and even the home of My Hero Academia creator Kohei Horikoshi—anything to uncover the secrets of Shonen Jump!

A mangaka summons a spirit that helps him meet deadlines at the cost of his health.

Kenzaki Ryuunosuke is a new editor for Weekly Shounen Magazine, but his love for an unpopular series gets him no love with his coworkers. He meets Takanashi Tsubasa, an aspiring mangaka, and seeks to prove himself by making her the number one manga artist in Japan.

This is the tale of how Adachi Mitsuru went from being an assistant artist on a weekly manga to the superstar manga-ka we know him to be today. But it’s told (and written by) Mitsuru’s older brother Tsutomu, who was also an assistant artist early on in their careers…

Welcome to Honoh Productions, where a crackpot team works to create the next big action-packed manga. Spearheaded by the eccentric Moyuru Honoo, he and his long-suffering assistants will fight with all their might on the battlefield that is the manga industry. Whether its struggling to meet deadlines, negotiating the end of a series with a bodacious editor who won't say no, or going through the soul-crushing process of constant redraws, Moyuru's journey is full of thrilling ups and downs!