This is the Happiness and Peace of Mind Committee. - Recommendations 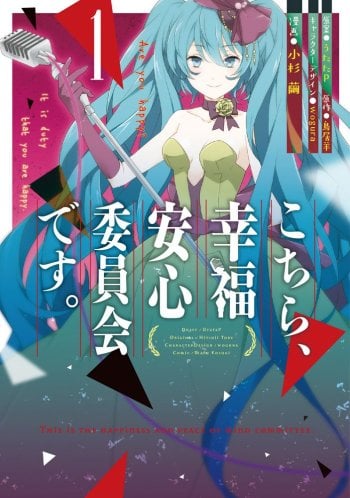 If you're looking for manga similar to This is the Happiness and Peace of Mind Committee., you might like these titles.

Asano is a young university student tasked with testing out the technology department’s newest creation—the life-like android, Hatsune Miku. Although Hatsune Miku has a lot to learn, Asano comes to see her as more than merely a piece of tech and together the two learn what life and love is all about.

On the stage in the gymnasium with all the students gathered together, Kagami Len declared his love in a loud voice, the spotlight shining down on him. My head spinning from the unthinkable timing of what he shouldn’t have said, even now it feels like I’m about to collapse. As I’m dumbfounded, the root of all evil waves his hand at me, his face beaming with a smile.And so, because of a certain playboy, it was suddenly decided that the plain me’s high school life will end up turning into an uproar.

Rin Kagamine's childhood best friend, Shun Otonashi, transfers back to her middle school just as she's in the middle of puberty. Shun's demeanor has changed so much since they were young that Rin is confused as to how to talk to him. On the way home from his first day of school, Rin suddenly asks him why he's returned to the neighborhood. He answers, "I wanted to see you again, Rin," as a joke (?). At those words, Rin's heart begins to thunder...

Miku has loved singing since she was little. She earned a magnificent victory in her audition and stepped into the world of idols. Finally, she became a top idol, but the office she belongs to has forbidden any kind of romance. Soon, Miku starts to wish that she could fall in love like a normal girl. Then, one day, she meets a mysterious boy named Len in a dream... The motif to this story is the Baku, a legendary creature that is said to 'eat dreams.'

A plane crash happened 13 years ago. Appearing before Megumi, the lone survivor of this crash, as a student teacher is Suzuki. These two begin to draw close because of what happened on that fateful day, but what could they be hiding from everyone...!?