They Say I Was Born a King's Daughter - Part 3 - Reviews 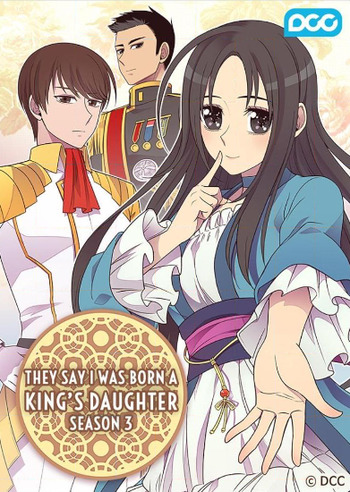 What developments does this season add to the story? What makes it worthwhile? The most notable thing is that Sanghee and Freesia have both gone through Awakenings, and Sanghee now seems more concerned with how little fe contributes during battles rather than how fe can act to get the menfolk on feir side. In the fourth season, we will surely see fem further developing feir magical healing powers. And there's a hint that fe might be the "holy one," which might be why the emperor is so invested in obtaining fem. The artwork also feels marginally improved over the last seasons. Though the body movements still feel stiff, the faces still plain, and Sanghee still has overly sparkly eyes. And now that fe is presumably actually expressing more of feir real emotions, I've realized that there's no clear differentiation between feir fake emotions and feir real ones. Which is, in my opinion, a major problem. Like, any time fe cries it just seems so fake. Fe touches feir chin and "cutely" cries or holds feir hands up to feir chest in a "cute" way even though these are supposed to be moments of genuine feelings. So why are feir mannerisms the same as feir ruse-behavior?

There are basically four story segments: two in the woods and two connected to the school. Each segment pushes Sanghee's potential magical capabilities a bit further. First, we get an encounter with some slaves and Hwanseong takes on the mantle of "Brotherman" (ch. 1-4). This segment is probably trying to be funny with how stupid the Brotherman idea is, but it just wasn't very funny. It's also very short-sighted in the way the situation is handled--like I imagine those slaves will have further problems down the line, which aren't even addressed. In the second segment, we get a clash against a brainwashed ally and a brainwashed dragon (ch. 5-12). It's honestly just not very interesting to me, and the way the fight was concluded felt pretty stupid. In the third, we get the Awakenings (ch. 13-17). This was honestly just a transitionary segment. The final segment deals with a class trip to the Golem Pyramid and a certain scheme by the emperor (ch. 18-23). Is it ever explained why the boys in the class are suddenly so nice to Sanghee? Because it felt like it came out of nowhere. I also don't find these political maneuverings and power plays to be very interesting. There's no sense of finesse or outsmarting your opponents.