They Say I Was Born a King's Daughter - Part 2 - Reviews 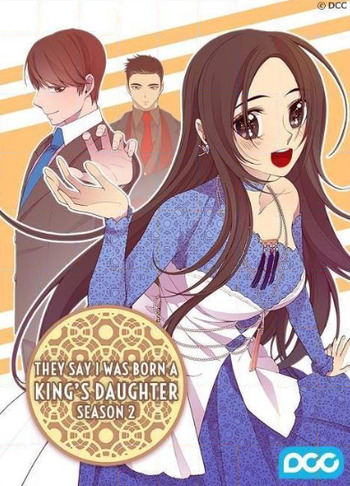 The novelty of such an absurdly misogynistic society is starting to wear off a little, though they're still milking some humorous moments from having subordinates and others interpret the protective actions of Sanghee's family as having ulterior, political motives 'cause they just can't process the idea of anyone valuing a woman in any way. This season covers Sanghee's time in the Institute of Magic and introduces a couple new characters. The most important ones being Dongsoo, William, Chris, and Joohyung. William is the primary antagonist, a classmate harassing and threatening Sanghee a couple times. The Royal Scumbag's response to fem is pretty funny. Dongsoo, another classmate, initially starts out as a mini-antagonist, but slowly starts gaining an appreciation for fem. Chris is an oddball. Fe comes from Baekjae, a country where women are actually treated with respect, and fe falls in love with Sanghee and treats fem with kindness and devotion. And finally Joohyung is a knight from Koryo who is acting as Sanghee's guard, while invisible. It's cute seeing fem slowly start seeing Sanghee as cute--a view that is seen as crazy in this world. We also see Sanghee interacting a lot with Freesia and Hwanseong. As well as Jinsu, of course. I still don't care for the Jinsu-Jinsu connection, nor do I like how central it is in the trajectory of the manhwa. The duality of feir personality. There could've been an interesting romance story set within this world, but this is not that. Honestly, this story might've actually been strongest with little or no romantic elements, with Sanghee just using blatant flattery and self-degradation to soften up the men around fem.

The art is still just as ugly as the first season. To the point that it's almost comical when they describe these clearly unattractively drawn boys as eye-candy.

It should also be mentioned that this world has problems beyond just its disparate treatment of the sexes. We see a few instances of how justice is carried out, with the disciplinary committees and stuff, and it relies far more on posturing and threatening others with your reputation and power than on any principle-based system of accountability. Obviously, no system is perfect. And the powerful will always find ways to abuse that power. But this story basically revels in that abuse of power, and doesn't even hint at reformation movements that would almost inevitably crop up in such abusive systems.

The story has potential and the art is ok (not the best nor the worst). The plot revolves around a young woman who gets killed before she can say "I love you" to her boyfriend. She reincarnates in a kingdom where she meets her soulmate again, but things are not very smooth since that this new world is trulymisogynist and women are looked down and treated poorly. (also they have a 13 years age gap, but apparently this is not an issuet... It was kinda cringe for me tho seeing a 17 years boy thinking about a lil girl 👀). The FL says that she wants to change this awful society, but she simply throws away her dignity and became a suck up. I'm sure that things change at some point, but it was so f frustrating, I read till chapter 92 and things were still the same, I couldn't take it anymore.

If you like this kind of stories I encourage you to read it but packed with patient, especially if you don't like a very dense mca and women harassment.