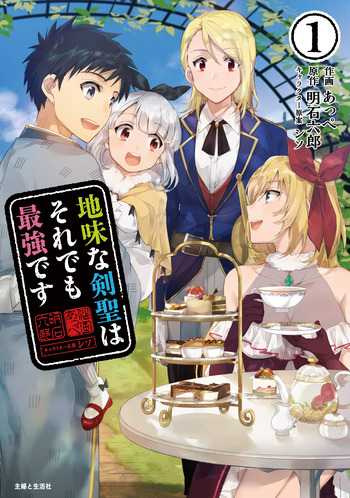 In what might be called "The World's Least Interesting Isekai" if you were fond of exageration (because I've read worse) this was exceedingly boring- but still an isekai.  It had a lot of promise at the start, with the comedic way he met god and then actually trained instead of just being given cheats- but it quickly went downhill as not a single character was lovable enough to form an attachment to.  I don't consider it a bad manga, but it's mediocre and boring.  Much like the main character is often complained about being.

Let's talk about this in two sections.

SECTION #1 consists of chapters one through let's say about chapter fifteen. It tells the story of Sansui who transmigrated to a fantasy world and then trained as a sage for five hundred years, developing overwhelmingly strong yet boring sword skills. Fe can defeat anyone in one or two strokes of feir sword. Upon finding a baby in the forest, feir master sends fem out of their hermitage to raise the child in human society. Fe gets a job as a bodyguard for the daughter of a noble family and fe lives a laidback life, defeating any threats and challengers with the utmost ease. It's cute.

SECTION #2 starts around chapter sixteen and is currently ongoing. It tells the story of the kingdoms of Arcana and Domino and their various power dynamics. In Arcana, there are the four noble houses--Sopeid, Batreble, Caputo, and Discia--and each of these houses has its own "trump card." Sansui is the trump card for house Sopeid. The fact that each noble family has its own transmigrated Japanese person with cheat-level abilities is nice and symmetrical and all, but it really makes the fact that Sansui joined femself to Dewey feel much less spontaneous. It makes the entire story feel too orderly and fated. This section of the story also includes an emphasis on the eight Divine Treasures, and we are introduced to six of them. Four of them are in the control of the neighboring country Domino. Again, this emphasis on having things fit into orderly boxes is not great. The main failing of this section, however, is that it tries to take a lighthearted and empty story and give it seriousness. We already know that Sansui's going to defeat whoever fe comes up against, and easily, so there will never be a sense of tension. The only reason why feir overpoweredness was at all acceptable and fun to read was because the manga didn't try to force that tension on feir battles. Now that it is trying to make feir fights have actual stakes, it still lacks any tension so it ultimately fails, and it's nowhere near as interesting to read.

Being completely honest, it's somewhat boring. There isn't much to the story, the characters are non-dynamic, and the art is pretty bland. The only thing that saves the non-dynamic characters is that their personalities aren't terrible annoying or the kind. However it is still enjoyable to read, although this might be simply due to overexposure to terrible isekai.

Overall, it isn't bad per se, but there isn't much to be excited about, no surprises or anyhting. Although the way the MC got his OP powers is a pretty funny prank by the goddess.