The World is Still Beautiful - Reviews 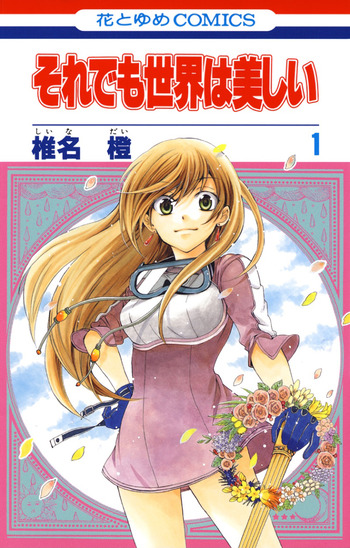 I really do love this manga! I totally recommend it if u love:-

The only thing i dont really like is that Livi (the main hero) is shorter/younger than Nike (the heroine). I m not really a fan of these kinds of relationships. But I really do love this manga, nonetheless. And Nike's singing voice in the anime is awesome too!

It was fun until it became obvious that the narrative is killing Nike as a charachter.

-Deadfish eyes, kidnapper, brut and a playboy - in the end best friend of Nike

-Depressed, kidnapper - in the end best friend of Nike

Every garbage dude in the end is a loving person who cares about his people.

She had a close encounter with every bigshoot character and after the short semi-romance episode you see her lovey dovey with the sun shrimp king. She got even jelous when her fiance took a fake concubine to safe her live while being kissed by strangers or spending a night while hugging a stranger(yeah i know the circumstances).

While creating a picture of a saint the narrative shows you the 'bar girl who easily get clingy'. I just feel sorry for Livi. While he changes through out the chapters, the airhead princess just continuously jumps from flower to flower while faking purity. I really did like the anime and this was trigger to read the manga.... but srsly, it's just total bs.

If you're into reverse harems, then you may be into this.

Pretty good idea overall, but for me the reverse harem ruined it. Personally I'm not a fan of harems in general. Just like in most harem genres, I don't like how every trashy and powerful male seems to fall in love with female MC instantly. I wish they had "reverse harem" tag as a warning.

The Female MC constantly get's kidnapped by some prince from another country or duke or whatnot. She get's attached to him somehow, they cuddle or kiss or get intimate while shes blushing and struggling to say she's married, and she always goes back to the MC while begging for mercy against the guys that tried to rape her or force marriage against her will. And MC is always just super happy to see her, and grants request. I'm ok with this once or twice. But I don't get why this theme is repeated for 100 chapters.... every 10 or so chapters..... It quickly starts to feel like some odd female reverse harem rape/cuckold fan fiction after the 5th time.

This manga started off sooooo good to the point where it was a 4.5/5 or 9/10 but it just goes downhill so quick that it made me do something I have never done before, lower my initial rating. Now it's down to 3.5/5 or 7/10.