The Way of the Househusband - Reviews 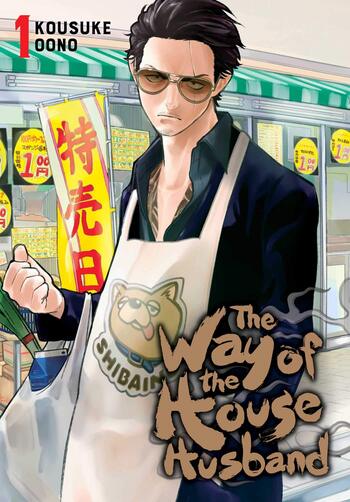 The humor comes from the gap between a yakuza-looking guy doing normal household tasks. Fe's doing feir shopping, cooking, cleaning, and other chores while having a resting face that looks like fe's glaring and with a comical level of intensity and passion--mannerisms which fe picked up from feir time in the yakuza. Fe used to be known as the Immortal Dragon and was feared in the underworld. We see fem interacting with feir wife, with the neighborhood ladies, with the people in the market, and with feir old acquaintances from feir time in the yakuza. Some of them are still in the yakuza, but some have also taken on more normal jobs (a crepe stand owner, a grocery store clerk). Generally the humor is based on fem being unintentionally scary, either in appearance or from feir word choice, which leads to misunderstandings. Along with that type of humor, there is also some slapstick, with several scenes having people getting hit in the face.

It's a cute and generally pleasant manga. The main reason I rated it as only a 6 is because, even though it's enjoyable, it's not laugh-out-loud funny and it can feel a bit repetitive. Though, to be fair, I feel like I tend to rate gag manga a bit lower on the scale since they're entirely dependent on how well their jokes land and how fresh their jokes feel over the course of the manga.

A mild, laidback slice of life manga. It shows the daily life of a very notorious Yakuza who has since married and settled down as a househusband. The main draw of the story is how he approaches everyday situations with the mindset of a successful gangster.

The humour is basically the dichotomy between his intense, intimidating persona & his otherwise normal actions some of which are wearing a teddy bear apron over his suit, attending housewives yoga, cooking classes, bargain hunting, buying his wife's favorite anime etc. It fell flat for me though.

While it's primarily Slice of Life, there is a slow but definite progression of the story. We are over time introduced to his ex-colleagues, the event which changed him, meeting his wife etc.

The art & characters are probably the only strengths of this manga. The characters aren't 2D but have depth, mysterious backstories & show development during the course of the manga. He and his wife also truly act like a comfortably married couple albeit quirky ones.

Reading the first few chapters ought to give you an idea of the rest of the series. All in all a decent manga but nothing special.

I heard there's going to be a Netflix anime adaption of this manga next year, so I decided to check it out!

Basically it just about a ex gang member bloke who is just doing "average Joe" things and taking up the "housewife" role to prove he's a good hubbie for his busy wife. There's nothing really more to it....

I can understand why some people might like this because in manga, we haven't really seen a yazuka trying to take up the role as a "housewife" . I also really liked the art too like it's sleek af man! However I think it needs more action and shouldn't try hard to try to be funny when the jokes in all seriousness , are just flat...

Yeah it's not my cup of tea unfortunately guys!

Absolutely love the character that is Tatsu. He is the chaotic good protagonist that any good house husband ought to emulate. The way they spin simple daily activities into high stakes, suspensful micro-dramas is incredibly funny. I can't put it down and can't wait to read more.

Amma say it...... THIS NEEDS AN ANIME!! would be just as funny as "Haven't you heard? I'm Sakamoto" I guarentee it. The art is perfect and it honestly makes the scenes 10 times more funny. Would be even funnier to see it animated.