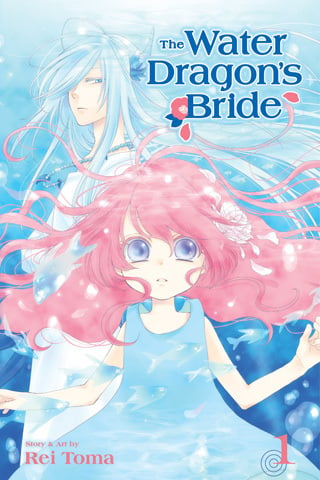 A young boy named Subaru comes to Asahi’s aid, but despite his help, Asahi must endure a test of survival! Will she be able to make it out alive, or will she end up being sacrificed?

This sounds stupid but the manga actually got my tears on a few last chapter. A story about a God - Human relationship. Asahi fell into the small pond at the back of her house when she was little, only to find herself waking up in a complety different world. Unlike other MC who usually got transferred when they were an adult or a teenage girl, Asahi's a child, literally, around 5 or 6. She stared to grow up and got attached to the land here, living as 'The Bride of the Water God'. Through times they developed their feelings toward each other, denial - realization. A God, thousand years still remain the same, nonchalant, expressionless, lonely, he never understand pain, human needs, or happiness. But finally, he met her. The only lively thing that has ever existed in his eternal life. This perhaps, is what human called 'love'. "I'll wait until you can find me, Asahi. No matter how long it takes. I'll wait until I can see you again, even if it costs my life. I never get a chance to say this, so I'll say when we're together one more time... I love you."

Full disclosure here: I am, for all intents and purposes, EXTREMELY BIASED to like supernatural romances. So yeah. If you're the same, then good, we're on the same page. If you don't like supernatural romances... I can pretty much 100% guarantee that you will not like this series. If you want a kind of basic description of what this series is, think Inuyasha but shorter, with less action, more romance, and instead of a Dog Demon it's a Water God. Ok moving on Story: I liked it a lot! It kept me hooked from beginning to end, and I thought it was an amazing series overall. The story follows a young girl, Asahi, as she is spirited away from her home in modern Japan into ancient times, where she has to learn how to surive in the strange environment, while also having to deal with a intimidating Water God, who is more childlike than his appearance and mannerisms would suggest. One of the more interesting things I noted was the setting, as it took place around the Kofun period of Japan, as opposed to time Feudal periods most commonly used in time travel manga. It was a shorter manga, but it lasted long enough to get me attached to the characters, understand their motiviations, and root for them. The ending seemed a bit rushed, but it was what tied all the chapters beforehand together, so it did make sense. Also I did end up liking the romance! At first I really thought Asahi should have been with Subaru, but by the end I understood why she was supposed to be with Suijin, and why they really did belong together. Overall, I thought it was sweet! Art: Not much to say. I liked it, and I thought that the shading was really nice. Nothing overly spectacular, but it was visually appealing and I can't say I can imagine anyone not wanting to read because of the art style (For context, some series are very good, but their art style drives people away.) Characters: Really good. Probably my favorite part of the series. I like Asahi's portrayal a lot. She's a young girl snatched from her home and forced into a strange, unfamiliar world. At first being confused, then scared, than confused again, wanting to go home, and resolving to find her way back and survive. As she grows up she becomes more determined and confident, never quite accepting her current position but knowing it's how she must live. I liked that. Suijin, the Water God, was interesting as well. He acted how I'd expect an ancient God with no people skills to act. Childlike and selfish, but not really a bad guy. Subaru was great as well. A great friend who was willing to put his feelings after Asahi's... (He really did deserve better, lets be real.) I liked this series quite a bit! it's a shame it's only eleven volumes, but still, pick it up if you have the chance!

Completely amazing manga. When you read it you will get something even better than you expect. This story is very good and has even better ending. Recommend 10/10