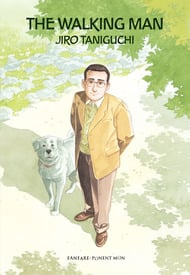 Who takes the time these days to climb a tree in bare feet to rescue a child’s toy? To stop and observe the birds? To play in the puddles after a storm? To go down to the sea to put a shell back? The Walking Man does as he strolls at random through urban Japan – often silent, often alone – with his vivid dreams that let time stand still.

518 users are tracking this. Log in to see stats.

A very particular manga calls for a particular review. I’m not going to use the usual “story”, “characters”, “art”, “overall” paragraphs I usually do, because for such a minimalist manga it would be pretty pointless. I’m just going to ramble on and describe it in simple terms. So, The Walking Man is a one-volume manga by award-winning mangaka Taniguchi Jirō. And never was a manga better described its title. The Walking Man is the story of a man who walks. Just strolling around, quietly and calmly. A normal guy, middle-aged, with a respectable job, a loving wife, a nice home. He just likes to take a walk. Without rushing, though. A calm, quiet walk. Well, if there’s a culture that’s able to turn the ordinary, the usual, the banal, into something of literary interesting, that’s the Japanese culture (as centuries of literature with works like Tanizaki’s Sasame Yuki have proven). In this almost mute manga (there’s only a handful of dialogues, most is told only visually) is indeed a small gem of subtlety about a theme that has always been dear to Japanese culture: that of the beauty of the little passing things around us. Not the great majestic landscape, but the small ephemeral flower. Something that the modern man, Western and Eastern alike, has completely forgotten: enjoying the beauty of the little things we see everyday. And that’s this manga: without any sort of character exploration or epic tight plot, it just shows this man as he walks around town. He smiles as he sees a fish in the river, or a bird on a tree whose name he later takes time to research, or an old lady he meets repeatedly during the same ramble; he allows himself a moment to lay down on a bed of fallen cherry blossoms, or to climb a tree, or to take a swim stark naked in a closed swimming pool one night. Things like these. Truly a small, adorable masterpiece. The art is really good, too, as you can see the usual Taniguchi style in character design and as you can easily immerse yourself in the environment and enjoy it together with the walking man. The fact that it has hardly any dialogue makes it an interesting read in the possibilities of manga as a visual medium: it’s “show, don’t tell” at its finest. So yeah, if you’re the kind of fellow who likes a bit of a different read once in a while, if you enjoy the typical Japanese sensibility, by all means find and read this. Calmly, though. Don’t rush through it: allow yourself the time to taste each page, each moment, each expression and event. If you can, read it outside, on a sunny day with a bit of wind; and then get up and take a walk. Whereto? Wherever. No Ipod, no smartphone, no destination, just a little bit of a walk. The everyday things around you can be beautiful in their own right, can’t they?