The Villainess Turns the Hourglass - Reviews 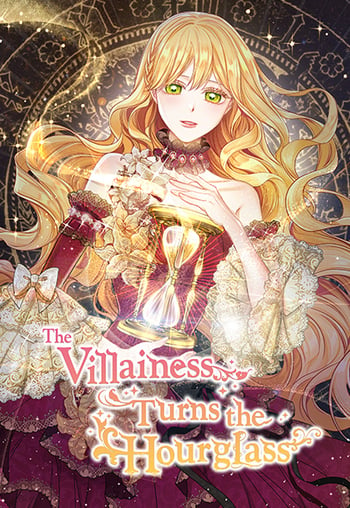 Loving the mc's character so far, she doesn't do a complete flip to her character (still a noble brat, just lowkey). This is the right kind of villain, instead of trying to be a better version of herself (in a good/innocent way) to help herself and others to avoid death/destruction she becomes a better person (in an evil way) in order to save herself and bring chaos to others.

If you're a person who dislike actual villain "villain" (a person who does actual bad things) then you'll find her actions uncomfortable. She's a bitch.

At first I wasn't excited about the romance part but wow, I love the ML and the two of them actually fit each other, no overly exaggerated blush, their interactions feels natural, I feel like a third wheel, a fangirl on the sides every time the ml appears.

Mc is a villain, and I'd be willing to be here underling. You'll understand when you get to know her.

This makes me feel so conflicted. This manga is a rare gem among it's kind because the main character is actually a villain i.e kind of a terrible person. While that makes for a great story that I have a lot of fun reading, it also leaves me feeling a bit uncomfortable.

I like to consider myself a morally up right person and you see, the thing with the main character is, that she's a BITCH. While it's very entertaining watching her plot away behind the scenes some off the actions she takes on stage leave me feeling icky and, not wanting to support her. Like with her teacher. This woman genuinely LOVES her yet her intentions towards her are so cruel.

Not to mention what she's doing to poor Oscar. He's the only real innocent in this story and I hate how he's being tormented.

The MC and her sister are embroiled in a "war" within the household, where each tries to bring the other down - our MC for survival and revenge, the sister out of jealousy. This leads to a host of schemes, including - but not limited to - sending maids as spies, sabotaging each other, attempting to steal the fiancé, trying to ruin each other's social reputation, and trying to impress the father of the family.

Some schemes fail, others succeed, just like in real life. Each action has a consequence, and (as far as I can see) nothing is forgotten. Along the way, we meet a host of other characters: supporters, antagonists, extras, and neutral parties.

Personally, I'm a huge fan of political intrigue and strong female characters, and in this story you get both.

The MC is constantly looking for ways to win and survive, never getting side-tracked or forgetting her objective like in other manwha I've read. While she does experience setbacks, she never lets them bring her down for long, instead finding ways to profit or learn from it. The MC feels very "natural" in general; it's not hard for me to imagine that someone would behave like this after everything that happened in her past life.

So far, there hasn't been a lot of romance for the MC, but the hints that we get feel very organic. All characters seem well-rounded and their actions understandable - so far, nobody behaved in a way that I absolutely couldn't get where it came from.

I definitely recommend that you at least check it out, I haven't regretted it.

The artstyle is just beautiful and it really draws you in to the plot of the story. The MC is very clever and because she went back in time, she becomes a completely different person. I find everything about this manhwa very chraming and intriguing. I also like the fact that is not too overpowered and knows where her faults lie despite turning over a new leaf in life. The ML is also nothing to overlook even though he doesn't make an official entrance until later on. His attitude towards the FL is a lot more likeable compared to other MLs who just obsess of the FL and force her to love them back. There isn't much romance in the current chapters, but the story is so good that I don't really mind if there isn't much.

Hands down one of the best main female leads if not the best in isekai manga out there. The exact kind of mc you want to see in a revenge setup. I couldn’t find any other character interesting yet whatsoever but I believe it is still quite early to say that. The story is average but I’m curious about the development of the plot. I’m pretty sure it’s going to get less and less interesting once her love interest pops up and gets overly involved with her affairs. With that being said, I will continue reading because of the main lead and I have high hopes about this manga.