The Villain Princess Wants to Live in a Confectionery Shop - Recommendations 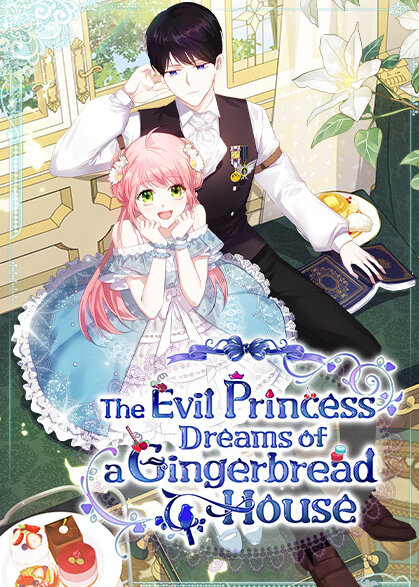 If you're looking for manga similar to The Villain Princess Wants to Live in a Confectionery Shop, you might like these titles.

Sena’s been tossed into another world, as the despised daughter of a noble family. Her little restaurant was her refuge in her last life, so she’s got some tricks up her sleeve—cooking skills! As Senianna, she’ll put her brains and fine-tuned taste buds (Korean fried chicken, anyone?) to the test so she can take back the kitchen and gain this society’s esteemed title of Chef Royale. Will her cuisine reign supreme over the empire and bring her the sweet and salty balance of power and affection?

Both involve stories of young female protagonists that find themselves having to adjust to a new life within nobal families and discover their talent towards cooking. They both use this to their advantage to gain favor from the new family who originally had been hostile to them.

To save my family from certain doom, I offered to become the Emperor’s secretary in place of my clumsy brother. I excelled at work in my previous life… to the point of overworking myself, but that’s beside the point! I know I got this. I served the tyrant emperor perfectly, down to a T, so now I can quit working and the plot can continue on. But when I asked to resign, he retorted, “Do you want to die?” Your Majesty, you’ve always been disinterested in people, why are you holding me back? Please let me live the rest of my life peacefully!

There Were Times When I Wished You Were Dead

I Got Pregnant with the Tyrant's Child

For Elan the royal knight, the masquerade festival is a rare chance to let loose and relax. But her night of fun quickly turns into a morning of horror when she wakes up beside the ruthless Emperor Kylart. Knowing how cruel he can be to clingy women, Elan makes a run for it, hoping he hasn't seen past her disguise. But as she continues her nerve-wracking duties of guarding the emperor, she starts experiencing troubling health symptoms. A trip to the doctor reveals that she's pregnant! To make matters worse, rumor has it that Kylart is looking for the mysterious woman he met on the night of the festival. Can Elan keep her secret safe from the entire palace, when she can't even control her constant cravings and morning sickness?

The Elixir of the Sun

Bayan is an outcast amongst the Siyo, a people who have healing powers. Considered worthless because she doesn’t have the ability to heal others, Bayan is sent to the court of Dhan, the Great Sun Emperor, who is cursed with unrelenting bloodlust and slaughters his concubines mercilessly. It seems that Bayan’s fate is sealed the moment she reaches the emperor’s palace and Dhan is fated to suffer from madness forever... But together, Bayan and Dhan just might be able to change each other’s destiny.

Yunjo is a young prince who has always served his kingdom from behind the scenes. He’s spent his whole life in the shadow of his brother, the crown prince Yigang, fighting enemies and winning wars in his name. All that changes when one day, he meets Seolyun, a mysterious and charming woman who captivates him instantly. What happens when a man emerges from the shadows to follow his heart? Can he overcome all of the obstacles in his way to step into the light and be with the one he loves?

The beautiful imperial princess of the Brizina Empire, Kasia Miro del Brizina, is rumoured to be a witch, but she just has one tiny wish. To open a doll shop. In order to make it a reality, she calls in the favor of her stepbrother, Emperor Deon.

The extra who sacrifices herself for the beloved female lead. Princess Shuelina who is tossed aside by her biologically related father and older brother. Now I’m the main character of this odd situation. In regards to hope, I’m still neglected at this orphanage. Just as I was going to run away before the imperial family found me.

Ran is the young empress of the North Empire. In order to protect her empire, she must assassinate the Orhan, the new emperor of the West Empire. Ran plans to ensnare Orhan in a honey trap by guising a beautiful assassin as tribute of good will. It is revealed, however, that the emperor is not interested in any other woman but Ran herself. Rude and arrogant like a savage, the emperor dares to claim the heart of the noble empress. Left without a choice, Ran decides to hide her identity and sends herself as tribute to the emperor. Can the empress win the emperor's trust? Will the empress be able to assassinate the emperor?