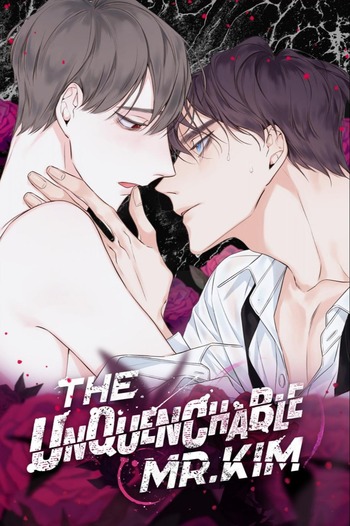 Blood Bank is where vampires come to buy human blood! In a land where vampires, the supreme beings, rule human beings, there are those that have abnormalities. These vampires, while still superior, prefer to be ruled and commanded by humans. See how Shell, the son of a Blood Bank lord, falls for a mere human banker, One.

Both of these manga have vampires as main characters and that's the main reason why I think you would like this manga.

Enter Seunghyun, a virgin in his late twenties. A late bloomer, he finally manages to score the internship of his dreams. On his first day at work, he runs into the handsome yet cold Jongchan Kim. Who is he? Just Seunghyun’s new boss! Will the two be able to keep their hands off each other at work?

they both take place in an office, they both contain a boss X employee relationship where the boss is strict and brooding and the employee is just trying their best

Asahito has spent his life convinced that no one will ever want or need him. His parents are long dead, he has no friends to speak of, and he's just been fired from his job after being assaulted by his coworkers. Just as he is starting to feel he would be better off dead, an accident nearly kills him. He is saved by Kazushige, a moody vampire who has also lost everyone who ever loved him. Tired of living, he has made numerous unsuccessful attempts to kill himself. Asahito begins visiting him each day, determined to find a way to repay him for saving his life. Kazushige tries to drive him away, but Asahito has finally found something - and someone - to live for.

Mikhail is a vampire who loves humans. He picks up a human boy named Johann and raises him as his son. But Johann doesn't see Mikhail as only his benefactor...

What will happen when a vampire meets a donor enthusiast? The popular nurse, Akabane Yuki, is a descendant of the vampire. He found the blood of a donor enthusiast, Mayuzumi Osamu, to be extremely tasty. He started taking care of him. One day, Mayuzumi suddenly told Yuki that he wouldn’t see him anymore. What exactly happened?

Shuri is an orphaned college student who was raised by his (very) distant cousin, Hisato; a centuries-old vampire who dreams of one day meeting his soulmate. Hisato will have sex with pretty much anyone in the meantime - including Shuri - but he refuses to commit himself to anyone less than the one destined to be his "heart". Shuri wants to be his "heart" more than anything, doing his best to chase away the string of enamored humans who offer Hisato their blood and body, but can he convince the vampire he loves that the two of them belong together - forever?

Gaon is a boy who turned into a vampire, having inherited the condition from his mother. He discovered that his one and only friend, Dong-yi, likes his older brother. Gaon loses all control when he smells the scent of blood. Aware of his unstability, he asked Dongyi for his help in order to safely graduate college, and in return promised to help him get closer to his brother. However, to the contrary of his plans, the possessive, cold-hearted Yohan came to take an interest in Dongyi, and the budding relationship between the two is slowly starting to get on Gaon's nerves.

Special chapters for The Sweetest Man.

With perfection idolized by subordinated and capable to the point of being teased, Kanzaki is a normal salaryman. For him, there was something he can't tell anyone about, a night that he can't forget... That is, his passionate days spent with Nagi, a male prostitute that he had a relationship with five years ago. However, that had also ended... After coming home from an overseas assignment, Kanzakit meets a subordinate within his company named Futagami that looks exactly like Nagi. Frozen time begins to move again in Takiba's drawn sensitive love!