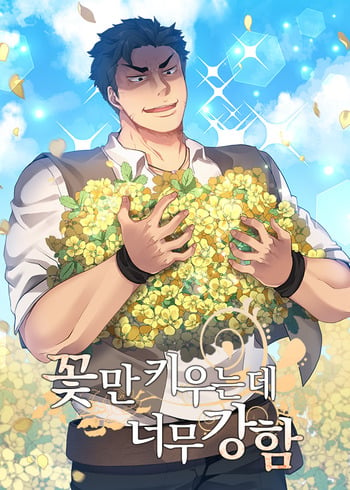 Leveling Up, by Only Eating!

The main character is stricken by a rare condition that affects only two people in the entire world, bulimic deficiency. He organizes his daily meals to survive, but his hope of survival grows dimmer as the days go by. He consults a doctor, who suggests playing the Alternate Reality Game 'Athens', where he can eat as much as he wants without gaining any weight. He plays the game to save his life and become stronger by doing nothing but eating!

Both are about VR games.

Both MCs are OBSESSED and SINCERELY ENJOY playing games because of something that they can't do irl for their reasons.

THEY ARE SO PERSISTENT, SINCERE and HAPPY to do be able to do this in VR game that you will be filled with joy while reading both mangas.

Florist can't be a florist irl because of his father and his scary face, and "Piggy-nim" (how that cute Hyaenim (I'm not sure if I spelled her name correctly) can't eat that much becuase he has to lose weight. He has "bindge eating disorder" how they represented it.

I just liked them both lol. i liked the video game concept both of them had and I like both MC's

Honestly it's mostly because of that light and nice feeling you get while reading it, oure enjoyment!

They both do thing they want to and help other people in meantime.

its great they both have op mean charechter and i love it so you should see if you love it to.

Your Smile Is A Trap

Ex-idol trainee Kiyu has lived his whole life adored by everyone for his good looks. But he dreams of ordinary high school life, so when he puts on glasses to blend in with his peers, he finds that making friends is a lot harder when you don’t have your looks to fall back on. Not to mention he’s also socially awkward, his new seatmate has a permanent scowl on her face, and his fans have tracked him down at his new school.

These are both amazing manga. They both teach the lesson of not judging someone based on how they look. The strongest florist has a scary looking guy who just want to open a flower shop while your smile is a trap has a scary looking girl who is actually really kind even though everyone thinks she's a bully because of how she looks. Both of these manga are so heartwarming and absolutely lovely. If you enjoy one, then you will absolutely love the other as well.

they're both very cute webtoons where the whole phrase "you cant judge a book by its cover" carries a whole lot of weight in the series. the whole thing is a huge misunderstanding just cause the characters look scary but actually aren't.

When you succeed at everything you try, you have no choice but to seek challenges elsewhere, like in a game. By using the trash jobs that no one pays any attention to, with the right attitude you're bound to accomplish your goals! even succeeding at the most impossible of quests, the main character bets everything he has. "With my skills I'll beat this game!"

The best-known VR game in the world, 'Kaillan'. A certified game addict well known in the virtual world, Ian. Despite having a Level 93 Archer character in the top leaderboards of Kaillan, Ian decides to delete it despite everyone around him telling him not to. All to convert to a hidden class he obtained by chance. The class he chose is the most worthless class in Kaillan, the Summoner class. If he wants to avoid getting an F in college, he needs to level up to his previous level within two months... Kaillan is notorious for its very cruel leveling system, where it is said to take over a year to reach level 100. His struggles to reach level 93 in only two months unfold... Level quickly, thoroughly and persistently. The legend of the 'Taming Master' begins!

Both are about VR games.

They both have unique classes and are playing the game for their personal enjoyment.

Shin Youngwoo, Username: Grid. In the world's best virtual reality game <SATISFY>, bad luck always follows him. But he stumbled across a job during a quest, the strongest legendary job out of over 2 billion players!

As Shin Youngwoo has had an unfortunate life and is now stuck carrying bricks on construction sites. He even had to do labor in the VR game, Satisfy! However, luck would soon enter his hopeless life. His character, ‘Grid’, would discover the Northern End Cave for a quest, and in that place, he would find ‘Pagma’s Rare Book’ and become a legendary class player…

"Sargent Ha, you crazy bastard. You shot another full round of bullseyes?" The sharpshooter Ha Leeha simply wanted to be a part of the army forever. However, due to an unfortunate accident, he became paraplegic and was tossed back into society. The revolutionary VR game "Middle Earth" presented a new life to him. Money obtained in "Middle Earth" has real-world value! Yet, he ruined his chance by selecting the lowest-tier character! "I'm not like the others. This is all I have." Black gunpowder, iron balls, and ramrods... I'll show you all that a real 'musketeer' is!

The third season of The Legendary Moonlight Sculptor.

The second season of The Legendary Moonlight Sculptor.