The Stories of Those Around Me - Reviews 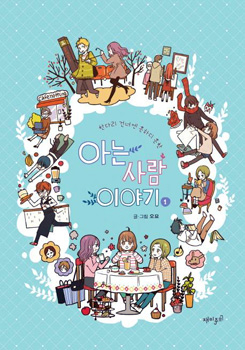 This story follows a group of friends, each telling their own individual story. The creator really develops each character and spends time dedicating it to one particular character at a time as well as the group as a whole. It's pretty interesting to see where things go, and I feel like any reader can relate themselves with at least one of the characters.

I have never expected to taken a liking on a webtoon story about 3 girls who are in their mid 20s (same age as me) and touches on what it's like to be in relationships realistically. In the romance genre, you see happily ever afters and that there's no strings attached with both parties. However in this webtoon, we see these 3 girls go through trials and tribulations when it comes to live. For real, we all go through relationships with people we use to hang out with, regardless if we dated them or have been friends with them for a short/long time. The world goes round at the end of the day.

Anyways getting back to this Webtoon, I just liked how the author really went in depth to talk about each girls personalities when it comes to the dating scene. It's obvious that Mira is pretty much a sassy businesswoman, Summer is pretty much a creative individual by making cute sheep charms and Jung-A is calm but isn't confident in admitting when things weren't going right with her bf. I was so relieved that they broke it off man, like he was pretty much a slacker and you could see the love ran out as soon as he got himself in hospital. Summer in the other hand, she was going through such a huge debate on herself if she liked her current bf or the barista dude. She was mature enough to call the relationship thing to a halt until she was satisfied enough for her to date again.

I really liked how this webtoon was different, I wish it was more recognised. I mean that ending man nearly burnt my eyes cause dang, it was such a good read for the whole day.