Alt titles: Binkkeopdegi Gongjakbuin, The Duchess with an Empty Soul 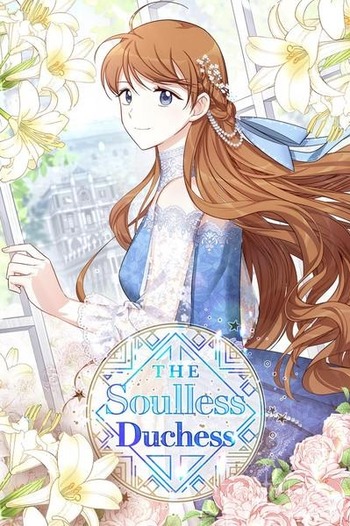 Initial impressions/summary additions?  In a male dominated society, a young woman with an abusive father and a male(!) cousin who gaslights her into submission along with her abusive fiance- who is actually gay and in love with her male cousin.  This isn't really spoilers, this is all revealed rather quickly.

Yeah, there are some tags and warnings missing.

The art isn't the worst I've seen but it's not great and the shading is lazy, the characters are two-dimensional in more ways than one, and the plot isn't anything original.  It's been done before and it's been done better, but it's not terrible, just below average.

A lot of the "contract marriage" stories hold a line similar to "I won't ever fall in love with you", which causes a line to be drawn that naturally causes tension when one or both parties realize they don't want that line. I really enjoyed that such tension and lines were never drawn in this story. They start off with the foundation of mutual respect and honesty that holds no expectations and they build from there. The story holds a lot of realistic aspects of unhealthy relationships and habits (not uncommonly from bigotry) while showing a healthy and growing relationship as the alternative. The ml and fl both have trauma but work hard towards being able to be honest and open to have a good relationship. The story itself with the supernatural elements, going back in time, etcetera, is rather enjoyable. I love how kickass the fl is without losing her feminity or sexualizing her. Smart, strong, and determined. She's out to protect what matters to her as well as dish out revenge on those who ruined her life before time rewound.

The story is common, with a few unique details but I feel this manga was executed poorly. It could've been better. The art was nice, but everyone has a baby face so I couldn't take them seriously. I was kind of surprised when the 'villainess' was actually a dude. Honestly, the story would've been better if it was between the villain and that blonde bastard.

Anyway, the story is too predictable. I do look how calm and collected she is but sometimes everyone's behavior is so corny. I wouldn't really recommend reading this. Warning: The cringe is real.

The story starts off with your typical aristocrat suffering from an abusive household, her wanting to escape from it by proposing a loveless marriage with another noble, and the two eventually falling in love --- despite agreeing not to in the first place. Although it's very similar to other manhwas, I continued reading it in hopes of falling in love with the characters, but for the first 30 chapters or so, I could not find myself charmed by the protagonist.

She is bland. The title The Duchess with an Empty Soul is not about her having an empty soul from her past but her being such a bland and empty character. (I'm referring to her as she because I still cannot remember her name because of how flat her character is.) The only charming thing about her is her fighting ability which is showcased later on in the manhwa, but even that's getting old.

The artwork is fine, but it's not amazing. I wish they gave some more oomph to the MC's art because the lackluster art is only emphasizing how bland she is.

Overall, if you're looking to find a manhwa to read in your spare time, this isn't a bad choice. I just wouldn't have high expectations.

Starting reading the story I was not much impressed. I even feared when I saw hints of BL that it will be the main topic... But the more I read, the more please I was. I am even surprised that I am liking it that much, as the romantic part of story is silly by way how idealistic it is, but maybe that extereme romantic vibe is funny in the end. And the storyline what is happening in the world and how main heroes are facing it is not back and has a good backbone - ebene BL mentioned before has proper reason and enhance the srory.

Unreastic romance optimism might be a big detriment for many, but in this case I had no problem with it.