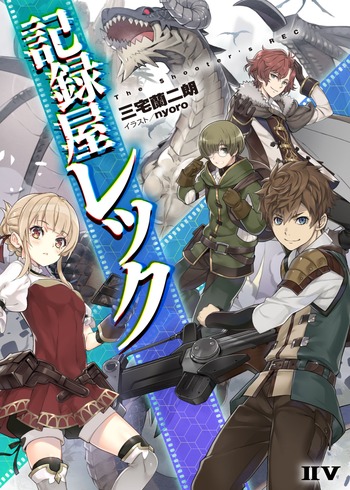 If you're looking for anime similar to The Shooter's Rec (Light Novel), you might like these titles.

Taro is not your usual village boy; a glutton and a sloth, he would rather be out playing with the animals than helping his fellow villagers, including his own grandmother. However, while wrestling with the animals one day a wizard appears and challenges him; and after Taro wins, the wizard gives him a potion that grants him the strength of a hundred men... but the power only works if Taro is helping someone. Shortly after, Taro discovers that his mother may still be alive – though in the form of a dragon due to a curse. Taro now sets forth to try to find his mother, traveling from mountain to mountain, while helping others along the way.

After 5000 years of existing peacefully in the wild, an herbivorous creature has his life turned upside down by a young girl who arrives at his cave and insists that he eat her. The local humans believe he is an evil dragon and hope presenting him with a sacrifice will persuade him to fight the Demon Lord on their behalf, but the 5000 year-old pacifist has no knowledge of demons and even less desire to wage war against them. His "sacrifice", on the other hand, is a blood-thirsty little psycho with extraordinary magic power; and a lie told to save the child's life leaves the newly-titled "evil dragon" traveling the land with her - and attempting to keep the destructive little brat from leaving a trail of blood and chaos in her wake!

A girl comes there to become a dentist of dragon. She is with other new freshman applicants, but there is no announcement from a senior as a guidance. They are confused and taken along with the senior. The only way is just to walk through freshman's path, which is dark and strange. They do not know where they are. Not knowing what to do, she is approaching to the secret of dragon, but she does not realize yet. The adventure has already begun.