The Reason Why Raeliana Ended up at the Duke's Mansion - Reviews 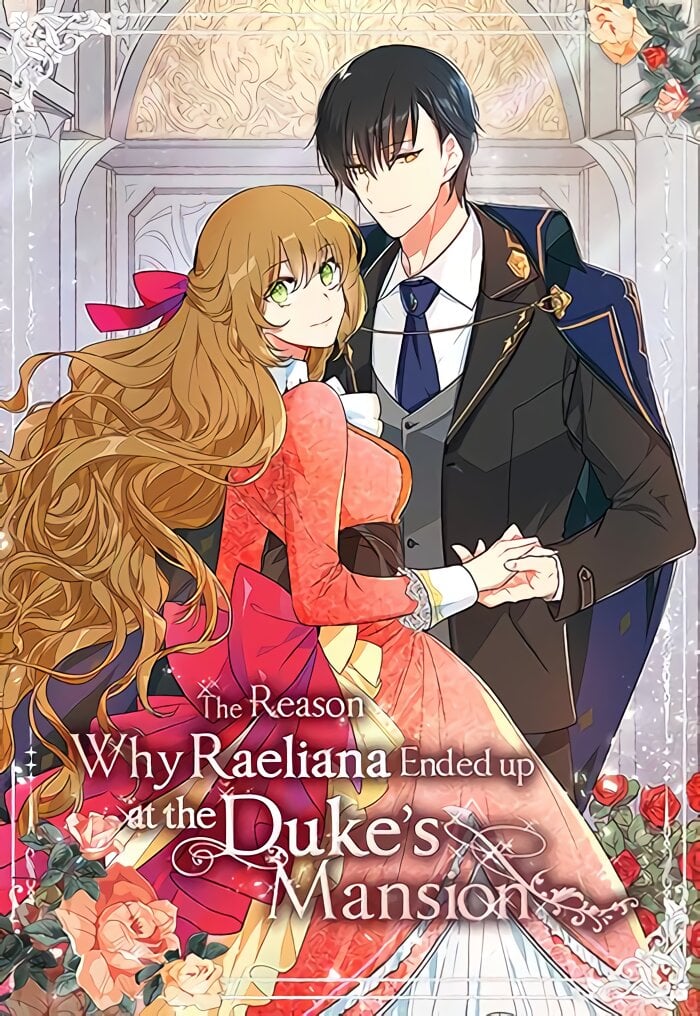 The Reason Why Raeliana Ended up at the Duke's Mansion is a fresh breath of air when it comes to shoujo isekai manhwa, every action the heroine takes is to protect herself as the only reason her character exists in the novel is to die and provide the chance for main characters to have a meet cute, the hero doesn't fall in love with the heroine in an instant for some unfathomable reason even after being called conniving every time a side character gets lines (I'm looking at you Empress of Another World).  What further separates this manhwa from other isekais' is that even Eunha's first death is an unsolved mystery and possibly it has some connections to why Raeliana is a target for murder even after escaping her fate.

Overall the plot is engaging, the characters are charming and the artwork is beautiful, if you're looking for a a light-hearted romance I'd definitely recommend this.

From the first chapter, I was hooked. At least for the first arc of the story, which I will say ends around chapter twenty-three. The first story arc, especially the first seven chapters, was much more engaging than the current one. It started as a story filled with conspiracies and people trying to manipulate each other in order to achieve their own goals. Raeliana was a driving force; fe was pushing the plot forward with feir own actions. Starting with chapter twenty-four, fe started to become more passive than active--letting events happen to fem rather than being the impetus for the events. And even though there are still some conspiracies and political shenanigans, the story started focusing more on the will-they/won't-they between Raeliana and Noah. I would score the first arc as a 10/10 and the current arc as a 4/10.

When drawn with detail, all of the characters are attractive and enjoyable to look at. And when drawn more simply, the characters are often adorable. But at times, the artist fell off the tightrope of simplistic art and drew panels which looked simple or amateurish but didn't evoke that sense of cuteness which they were intended to. Luckily, these lapses were a rare occurrence and the vast majority of the artwork was great.

This manhwa is an amazing read. The MC isn't dense to ML's feelings nor is she oblivious to her feelings - and she has a semi cliche reason of why she's avoiding him. The story may not be fully original, as it is an Isekai, but I have no regrets reading this and neither will you. ♡

This story is one of the better ones of its genre, but it's not the best. Like others have mentioned, the first few chapters were really exciting. We were able to see the characters, the tropes, and the plot.

However, for whatever reason, the author decided the original arch plot was too much and ended it quite quickly in my opinion. I wished this lasted a bit longer as it does re-emerge in the later chapters. But with the filler in the middle it felt a bit out of place.

The characters, including the main, were far more interesting in the beginning chapters than they were in the later. I can definitely see why many readers mentioned the story turning into a reverse harem. While that's not quite it, the supporting characters all fit around the main to make her look better and more wanted/appealing.

Which is my big issue with the story thus far. What exactly does the main character have to worry about? In almost every chapter we see her being able to do this, oh look now she can do that, she's perfect and the supporting characters love and support her. Even the animals serve to justify how great she is. And there are a few unneeded dramatic scenes to make the supporting characters fawn over her. In a perfect world, sure, but for a story - meh.

Once you read further into the chapters, you'll start understanding what I mean. Anything this character does, she does it perfectly, even if she messes up, it's somehow redeeming. She always one-ups the antagonists, astonishes the supporting characters, and is an expert at scholarly subjects. There's even one talent she has that makes absolutely no sense.

The only major issue she has was resolved in the first 30 chapters and any other conflict is just meh because it either doesn't happen enough or she solves it.

With that being said, the personality of the main character is one of the redeeming qualities. She knows herself and speaks her mind, something we don't often see in born again stories.

i think the story would really benefit from giving her some flaws, and developing more deeper connections with the characters other than "oh, now I'm smitten"

The plot is, okay, I wish the tension was bigger and the conflict lasted more than a couple of panels.

The story does have a lot of positives and it is worth the read. I'm hoping the story becomes a bit more convoluted but who knows.

Ok so first of all absolutly ignore the score i have given as ist only shows part of the truth.

The beginning is absolutily worth reading as its one of the better shojo webtoons, the problem comes with the continuation.

Let me explain: the beginning is driffen by intriege, political sabotage and everyone is trying their best to get what they want . so good so far ...

Unfortunatly it goes downhill from there. After the initial problems are solved it devolves into a bog of the line unintressting reverse harem story. The Protagonist loses its active role pretty much completely and falls into a passive role where things just happen to her without her doing things with  actuall impact.

The main pair is clear from the beginning and both make things pretty clear but they just live through the same unneeded uncertenties as all other couples in all other reverse harem storys.(most of the ones i have read at least)

They try to make it more intressting by giving her an Antagonist, who might actually give this story the spice it needs but what we have seen of her just lacks all substance. Therefore making it a drop in the ocean.(this might get better, I dont know )

They try to bring back the political intriege in the later chapters but it just feels like a side activity as they only go for around a chapter each, throwing all strategie out the window.

All in all: I have to say the beginning is pretty good but it drops of real fast

the actual score i give should therefore be read as two scores mixed together :

First a score for the beginning 8-9

Suggestion : read the beginning (around chapter 30) then stop

btw sorry for any spelling or other mistakes:me not good english