The Reason She Lives as a Villainess - Reviews 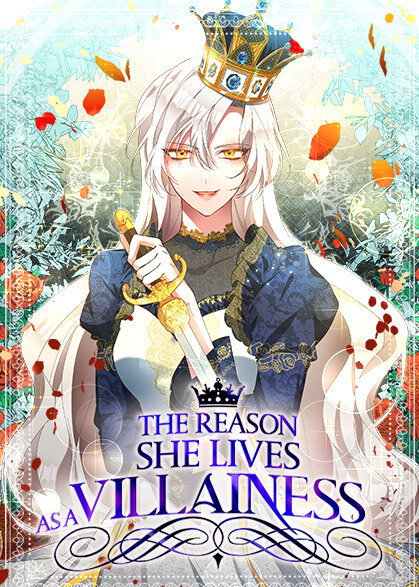 Our heroine was an office worker in Korea who got hit by Truck-kun and was isekai-ed into the world of a novel that she'd read. She wakes up as Lesian Husernien, the youngest daughter of Marquis Husernien and the tragic villainess of the novel who is killed in the original timeline only for time to rewind itself and give her another shot. Only... our heroine is in the original bit of the novel. Not the second chance time-travel part. Not wanting to 1. waste time or 2. chance that time won't rewind for her, she chooses to try and make her life better in the now (the original timeline) rather than the later (which potentially wouldn't even happen for her). Her first act? Stop her engagement and subsequent marriage to the Crown Prince. Her second act is to find a way to stop her father's rebellion or at least not get herself dragged into it since the Marquis and his other children absolutely despise Lesian. Also, Lesian's family is trash. Her bastard father never hired anyone to teach her anything and actually calls her a bitch to her face! AND her brother and her sister are also verbally abusive with the sister being physically abusive to top it off! And the father totally has it wrong about who the bitch is because the sister is the REAL bitch! (hilariously the sisters name is Baldea! x'D). Also, her maid is precious!

When the ML, Kiernan, appeared I laughed because Lesian, as a villainess, has resting villainess face lol and the ML totally has resting villain face! x'D (I'm assuming he's the ML, anyway. I mean, I COULD be wrong, but I don't think I am...) Kiernan is just a step below the Crown Prince, as he's a Duke, and seems to be close to the Prince in some way as he's frequently around him.  Kiernan takes an interest in Lesian after a chance encounter with her and is even more interested in her when she tries to cancel her engagement with the Crown Prince (which, unfortunately, doesn't go as planned as the Crown Prince has no intention of ending the engagement, despite the fact that he has a lover that he intends to keep even with the marriage).

As of the posting of this review there are only 15 chapters translated, but I'm enjoying it! The art is lovely and the plot is interesting. Though I'm really wondering how she's going to get out of the engagement without getting her head lopped off for offending the royal family in some way because the Prince is maddening and I'd be tempted to bitch slap the pretentious asshole! Also, the Prince's side-bitch is truly a bitch!

If you enjoy reading isekai manhwa or villainess manhwa then you'll likely enjoy this one as well. Give it a read!

There are plenty of opportunities for this manga to be unique in the world that it has created but ultimately, it wasn't as special or captivating as its peers in the genre. I think it doesn't bring anything new to the table, primarily justifying and following the same track that was laid out for it.

She is a good villainess and although she encounters trouble, I don't see anything that could make her 'win' against her enemies that hasn't been done previously. The art style is a little lacking as well - some proportions and framing choices are a little questionable if you wanted to slice hairs about it. I also cannot get a handle on the male lead - he seems so frivolous and easily manipulated, completely without personality away from her character.

Overall, it's not a bad read but it's not a great one either. I read it because I wanted to read and explore everything that the genre has to offer and this is part of it.

This manhwa could be so much better I swear! Art is gorgeous, but story pace and character development have serious problems. My biggest complaint is about the ml's character development!! He is such a sweetheart and HOT FOR REAL, but then his character and whole appearance feels so weak! It's as if he is just there to fill in the spot for the love interest and nothing more! He fell in love with fl within like the first 10 chs and I honestly was waiting on getting some explanation on how he fell for her that fast, but NOTHING!!!! Also we are already 70 chs into the story and we didn't get even the smallest background story on him! Honsetly aside from his interactions with fl, author didn't show anything about him! I dunno how he lives, where he lives, how he intracts with other people, who are/ were his family members, DOES HE EVEN HAVE ANY FAMILY MEMBERS, how come he is the duke and so free all the time, and most importantly aside from the lovey dovey side he shows to fl like 24/7 what are his other characteristics? SUCH A SHAME REALLY SUCH A EFFING SHAME! Honsetly he could be among my top ten favorite mls if portrayed better ! My second complaint is about the story pace. Sometimes story feels super dragged over some stupid situation that doesn't even matter, but then when it comes to smth important like figuring out how someone has betrayed the fl, how they got caught and what is their punishment everything ends within a few panels like WHATTTT?? I'D BE LIKE WHAT JUST HAPPENED? SO WITHIN A FEW PANELS THEY FIGURED OUT WHO WAS GUILTY AND PUNISHED THEM TO DEATH ALREADY? This manhwa had so much potential SUCH A FUCKIN SHAME!

Characters are written very well, and the story is interesting. Art isn't the best, however it isn't bad enough to ruin the story. Pacing is slower during scenes that are important to the leads' relationship, and pacing is faster with rest of the overall story. I personally did not have any issue with it, I saw in comments some people did. I would reccomend giving it a try.

If you are struggling to find sites that have the full translations, or can't find a good translation, please see my Reccomended list for the link to where you can read fully released, with good english translation.

It's not bad in the beginning, I was actually enjoying it, but I just didn't like the part where the duke fell for the fl so fast, maybe it's just me but yeah the more I continue reading it, for some reason it got dull on page 30's...