The Ravages of Time 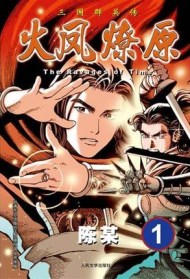 Nearly 2000 years ago, the prosperous Han dynasty of China collapsed. Heroes rose and fell, and three nations emerged--Wei, Shu, and Wu. Historians refer to this period as the Three Kingdoms period. The romance of the three kingdoms is an intriguing tale of heroic deeds, of alliance forged and broken, of loyalty and betrayal.

717 users are tracking this. Log in to see stats.

Unlike other Three Kingdom series, the Ravage of Time does something that no other has done. Breaking away from the tradition and at something new and fresh to the table. What the Ravage does is that it take's the characters that all the fans of the Three Kingdom know and love. And paint them in ways that has never been seen before and adding layers of layers of depth to these beloved characters. Making them more human and more relatable. The Ravages of Time is a spinoff of the 14th-century historical novel Romance of the Three Kingdoms. It tells the exploits of Liu Bei, Cao Cao, the Sun family, and other people from that period, from the point of view of the two main characters, Feng and Liaoyuan Huo, whose names collectively form the Chinese title of the manhua. Sima Yi is the young, unofficial leader of the Sima clan, a highly successful and rich merchant family with strong influence in politics and the economy. Unknown to people outside the clan, the elders have long deferred their power to Sima Yi, believing that he will bring prosperity to their clan, due to his flair for spotting profitable business ventures at a young age. The clan members operate out of public sight and position themselves where they can maximize their profits regardless of the political situation. They command a group of mercenary assassins, known as the Handicapped Warriors (殘兵), who assist them in manipulating politics. The mercenaries are reputed to be all handicapped, but have developed special abilities for conducting assassinations. They are led by Liaoyuan Huo, said to be a "one-eyed" assassin and the best one in the land. Here's few commentaries from the fan of the Ravage. You like other historical manga (Kingdom, Vinland Saga, Vagabond): This is definitely for you. This is a realistic depictions of historical past. If you like anything like the manga I've listed, hell yeah you will like it. You like strategy (Death Note, Liar's Game etc): This is war, so there's a god damn ton of strategy. And it's China, the land of Sun Tzu and his Arts of War. There are geniuses abound and everyone piles gambits upon gambits upon gambits on each other. Everyone has a plan, everyone wants something. And if you already know a little about the Three Kingdoms, just so you know, everyone got a genius upgrade. The geniuses before are now even more godlike in their strategical prowess. The normal before are now competent commanders. And the brutes before are now geniuses. It's a world filled with at least multiple Kira, L, Near and Mello. At the same time. And they don't really like each other. You like action and fighting: Oh boy can it deliver, you saw those images up there? it's always like that. And though this manhua is realistic, it doesn't mean you won't get your fair share of men with inhuman strength fighting each others (sorry women, it was a different time), Koei/Dynasty Warriors gamers can tell you all about it. You like to be a bit more cultured: War and civilization are like two faces of the same coin. It brings out the best and the worst of us. Here was a an empire in its deadliest conflict ever, its warriors learnt, its writers then reflect. If you look at the link above, the two old men fighting? one of them is having a monologue about the heroic nature of giving up renown and the heroic nature of fighting for fame even while you're old. The story is rife with this. And you might just want to pick up a book later about China and one of the longest running civilization in history. You like to feel something: Oh will you feel. This is war. There is so much tragedy, for there must be losers. There is so much elation, for there must be victors. There must be love, for there are humans. And there must be everything in between, because this is a good story. You like to read a well-crafted story with excellent art, with a huge cast of diverse characters that have different goals and meanings in life. Ps: you might need to open wikipedia a bit much in the beginning. Authored by Chen Mou, The Ravages of Times is one of the most popular manhua, and for good reasons. You should check it out. Oh yeah, Eight Geinuses for the win (wink wink)! PS: There's a trap PS: If you want to talk more about this amazing series you should join the fan group in here  https://discordapp.com/channels/355425195261165591/355425195772739585 See you there :wave:

this manga is full of hardcore politics. if you like kingdom there is a high chance you are also gonna like this one. only read it if your brain can handle very complicated type of plot which keeps changing every few chapters.