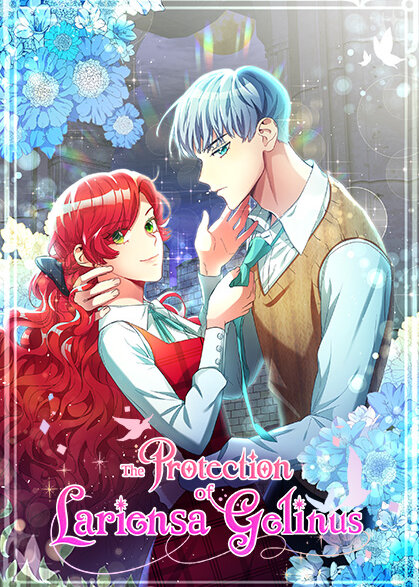 If you're looking for manga similar to The Protection of Lariensa Gelinus, you might like these titles.

Show why the male leads aren't always good for the original novels female lead. The humor is also a bonus.

Their interactions will make you feel proud of their friendship.

In both mangas, the protagonist possesses a would-be minor villainess in a romance novel where the FL is destined to attract the attention of a few different awful ML's. The MC's both become attached to the original FL and spend some time protecting her with the knowledge she has from the original story making the MLs somewhat redundant and giving the FL freedom from the story.

Naturally charming, Irene attracts women like a magnet, even when she doesn't mean to. Enter her best friend, Claudia, who refuses to marry any of her three suitors because of her affection for Irene. As a result, these powerful and mentally unstable men declare Irene as their rival in love and threaten her life. She knows none of them deserve to be with Claudia, but she doesn’t want to die! To save both her friend and herself, Irene must prove she's their ultimate rival, but will she succeed?

In both mangas, the protagonist possesses a side character in a romance novel where the FL is destined to attract the attention of a few different awful ML's. The MC becomes attached to the original FL and spends her time protecting her from her would-be suitors and in the process draws their ire and in some cases their interest.

FL slides in real close to the OGFL and changes the plot of the story to save her friend from men and their disasters. The ML is different in each for protection the ML is OGML while the ML in heroes rival is the OGFL's brother

Waking up inside your favorite novel sounds like a dream come true. Unless you’re born as the hated villainess, that is. Our new, full-fledged Louise Sweeny must try to reinvent her character to dodge her doomed fate of being killed off at the end of the story. It seemed easy enough at first, but there’s one big problem. The story, which she knew like the back of her hand, has veered so far off course that she can’t predict what plot twists are coming next. Can she avoid getting in the way of the male and female leads’ romance to save herself from impending demise?

- Both take place mainly in a school setting

- Both female leads are "transported" into a "book world"

A girl obsessed with a novel suddenly finds herself transported into the thick of the plot. The problem is, she has taken on the role of the villain in the story. And she knows how this ends…it’s off with her head! Maybe she’ll just let this play out and wake up back in reality… But after a few too many deaths to no avail, it’s finally time to go off-script. She's going to have a little fun with this tale. She’s made up her mind…to live!

In both manhwas is the FL friends with the original FL and the ML is also obsessive. In "The Protection of Lariensa Gelinus" is he even more obsessed and handsome, but that's what we like, the more, the better XD

I like the art in both manhwas and the plot is interesting. They are very similar in some aspects but also very different.

I hope you enjoy reading these :)

An unlucky past life. When I opened my eyes after dying, I became not a gold spoon, but a diamond spoon! Finally, the flower road in my life has bloomed! However...I'm adopted? Furthermore, this is the world inside of a novel. I'm destined to be murdered by my psychopath younger brother? Okay! I'll leave my brother to the female lead and run away! The day the female lead makes her appearance, my brother the villain says he'll kill her?!

I passed out after a day filled with misfortune. When I later opened my eyes, I was inside my favorite novel. Unfortunately, I was reincarnated as the villainess who was ruined after wreaking havoc due to her obsession with the male lead… That doesn’t matter! I won’t become a villainess, and will instead match my favorite character in this novel, the second male lead, with the heroine! But this is… harder than I imagined?!?!

The Villainess Flips the Script!

I woke up inside my favorite novel, not as the protagonist, Luca Winterwald, but as Judith, his abusive aunt and the first character to die—time for a rewrite! I’ll hand Luca off to his loving, long-lost uncle as scripted, and then live my own life far from danger. At least, that was the plan. When his uncle arrives, Luca suddenly calls out, “Don’t leave!” Now, I must protect Luca from impending family tragedy, raise him to become the hero, and turn this villainess’s ending upside down!

The Perfect Ending for the Villainess of a Fairy Tale

[There was a pitiful girl who cried tears of diamond and lived while being abused by her family. But a prince appeared and killed off the entirety of the evil family. And so, the girl lived happily ever after with the prince.] ...is the fairy tale, but I reincarnated as the evil sister, 'Marcia Blick'?! This damned household! I have to escape from this house now, at least! But if I run away, what about my sister who will be left behind? I've made my decision! We're going to run away together !'Larisa. Let's go find that prince who will make you happy! But... Prince, why are you proposing to me? Your partner isn't me, but my sister! This sister of yours will make you a 'perfect ending plan'!