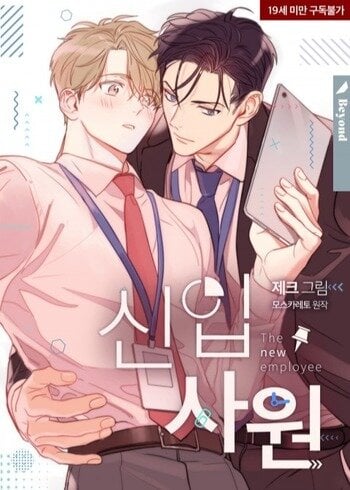 A charming young man with a job at one of the top firms in Korea, Param is a catch by everyone’s standards. However, he has a couple secrets that could topple his hard-won elite status: Param is gay, and has an oversensitive body that gets turned on at the slightest touch. So far, he’s coped by hiding his crush on his boss and taking care of “emergencies” in the office bathroom. But one day, he’s caught redhanded by the new personal trainer at the company gym. Will this hot, smirking jock ruin Param's life, or turn out to be his remedy?

ANTI P.T. and The New Employee are light-hearted workplace romances featuring healthy relationships. Our MCs are very innocent, loveable, and emotional. They're also very hardworking in their careers, and are constantly praised as model employees. Their love interests are patient and respectful towards their partners. Both webtoons have a healthy dose of fluff and smut.

Just Another Hard Day At Work!

Nozomu from sales is always coming to system engineer Teppei with projects that have ridiculous deadlines. No one else will do them but Teppei, and it's because he's always had a secret crush on Nozomu. One day, Teppei decides to blackmail Nozomu into getting intimate with him. What'll happen to the sweet, straight sales guy and the younger alpha male...?

Being the perfect girl at the office is not so easy, especially when you've got a big secret to hide from co-workers: your boyfriend is working here with you! Keeping the relationship together is a not-so-perfect challenge, will she be able to take charge of the situation?

Kaname Kurosaki: 28 years old and in the prime of manhood, working as lead programmer on the development team. Good at his job, not so good with women... and sexually frustrated every day. The one who helps him with that is his co-worker, Yuki, the lead producer of the planning department. Kaname and this sparkly-eyed "prince charming" have a history of jerking each other off in the office late at night. They both like women, but they can't help using each other for some sexual release. Kaname doesn't think much about what they're doing, but Yuki gradually begins to escalate things. One day, Yuki asks if they could try something different, and starts playing with Kaname's ass...! Now the "prince" of the office is opening Kaname's eyes to a whole new world of sex! A princely sex-fiend paired with the office hotshot who has plenty of sexual desire to spare... This is a wild and smutty love story!

A woman manager in a company filled with all the yaoi clichés. All her coworkers are men, gay and very incompetent, most likely because they are more concerned about their "secret" dating. Only her superior that looks like a broom with glasses seems not to be involved with anyone and keeps yelling at her for any little thing.

Welcome to Sales Department Two, where all the employees are women... that is, until Mr. Amano, a shy dreamer who perpetually spins off into homoerotic fantasies, and Mr. Kakimoto, the persistent wanna-be husband of Mr. Amano, are transferred in. Don't worry; the women are on it! Elsewhere in town, a waiter gushes with daily public affection and special meals for his high-strung paramour, while their friend has trouble swallowing an extra helping of violent flirting every lunch hour. Mix in a cocky waitress, a brash interloper, an old guy who won't listen to reason, and what do you get?