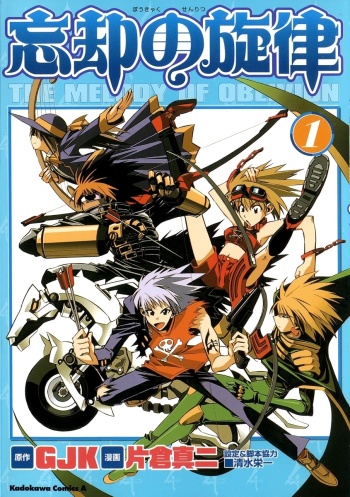 Due to a chance encounter with an actual space pilot. Nono, finds herself becoming part of the elite Fraternity. Made up of teenage pilots called Topless, and armed with quasi-humanoid weapons called Buster Machines, the Fraternity's mission is to protect the people of the Solar System from attack by swarms of space monsters.

In response to signs of an impending invasion by alien conquerors, five young people have undergone modification surgery in order to gain the strength to fight them off when they arrive. There's been no sign of them since the initial warning message ten years ago. The hero of justice Serena and her teammate/lackey/punching bag Souya have been using their powers to protect the weak and destroy evil wherever it looms its head. But with the sudden return of their childhood friend, things are in for a change.

Rinne no Lagrange: Flower Declaration of Your Heart

Strike Witches: The Sky that Connects Us

The year is 1944, and the war against the Neuroi is over. The 501st Joint Fighter Wing, also known as the Strike Witches, have accomplished their goal of protecting Britannia from the alien invaders. Now that the battle is done, the Witches disband and decide to go their separate ways for some much-needed R&R. As the girls enjoy downtime in the warstricken lands of Gallia and the deserts of Africa, a new danger lurks. A mysterious alien/ human hybrid foretells of another impending invasion. Can the Strike Witches regroup in time to defeat this latest evil threat?

In humanity's fight against the alien Neuroi, it's not just the super-aces and movie stars of the 501st Joint Fighter Wing who have stories worth telling. In this volume, Sergeant Wilma Bishop―the first character ever introduced from the Strike Witches world!―is transferred to the Isle of Wight detachment. It's the sister detachment to the famous 501st, but instead of aces, the Isle of Wight is filled with awkward, insecure newbies and the walking wounded. And yet, while these "one-winged Witches" may not be ready to soar with the aces, each one has her own story to tell.

The Queen anthology series focuses on the female characters from Code Geass, and presents side stories by an eclectic group of manga artists.

Hyeon Kang, a self-centered high school kid, has to bear the burdening fate of being the master of 'KANGTAWOO', the only robot that can stand against 'Spelta Empire', which seeks to conquer Earth.

Boku to Majo no Jikan

It was supposed to be his most lucky day ever right? so how did he end up dying? And if he's dead why did he wake up in a lab with a strange girl who says she wants to examine him? Not only has his hair turned white and his eyes red, but he can't seem to be wounded by anything. So much for a lucky day huh?