The Melancholy of Haruhi Suzumiya - Recommendations 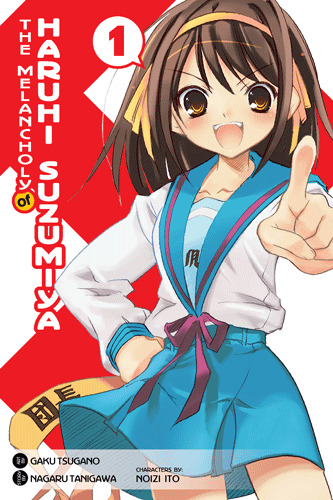 If you're looking for manga similar to The Melancholy of Haruhi Suzumiya, you might like these titles.

Medaka Kurokami is the perfect honour student. She has exemplary grades, talent at any sport she tries her hand at, comes from a rich family, is exceptionally popular, and has just become the first ever freshman student to be elected School President! During her inauguration speech she proclaims that she will endeavour to help every student with any problem if they simply submit it to the newly instated suggestion box. But with a bare-bones student council consisting of only herself and her unwilling accomplice Zenkichi, people are unsure whether to take her seriously or not. Regardless, Medaka takes each suggestion and gives her all to fulfil any request, be it ridding the kendo hall of delinquents, writing a love letter, or helping a struggling art student find his muse.

Both are mangas in which selfish, arrogant and talented female lead tries to change the world in some way. Her methods are weird, her actions are bizarre but the outcome is usually good.  There is also a poor male character, who have a crush on the heroine. He is constantly getting abused and dragged around at girl's pace in order to help with the peculiar plans. Also on a course of story a lot of other weird characters gather around the girl, and aid her in her actions.

Both are mainly comedy, with some romance mixed in (and battles in Medaka case). If you like the treatment Kyon is getting from Haruhi, you will also like Medaka+ Hitoyoshi combi)

On a side note - Haruhi have  anime way better than the manga, so if you  decided to check Haruhi after reading Medaka you might consider watching the anime instead ( 2006, not 2009 though. 2009 is an abomination due to "Endless 8")

Clannad is set in a high-school located in a Japanese town. Tomoya Okazaki is a third-year student who doesn't take his studies seriously. Always late for class, he's seen as a delinquent by the rest of his classmates who are busy preparing for their entrance examinations. Needless to say, he doesn't have too many close friends either. Tomoya seems not to mind too--until he meets a few other girls from his school. Though he doesn't care much about them at first, he soon opens his heart to them as they get to know each other better.

In Clannad and The Melancholy of Haruhi Suzumiya the main characters are bored and want to make a club. They also both have supernatural aspects to them and a bunch of crazy situations, with comical moments intertwined.

Both of the main characters in Death Note and The Melancholy of Haruhi Suzumiya have a desire to change the world that they are in. In Death Note, Light decides to change it in a drastic violent, way as opposed to Haruhi who wants to start over completely.

In the Melancholy of Haruhi Suzumiya and Ouran High School Host Club the characters learn that something outside of their own ‘world’ exists. In the case of Ouran they learn about instant coffee, which does not seem like a big deal to the average person but to the elite, aristocratic characters it was a major point in the series. Where as in the Melancholy of Haruhi Suzumiya, Kyon learns of aliens, time traveling, and espers, something the average person has no idea about. There is a little bit of romance squeezed into each series with some comical aspects too.

Some time before Otonashi made his way into the lives of Yuri and the gang, and prior to the creation of the SSS, Hinata is involved in a car crash and wakes up in life after death. Surrounded by strange classmates in a strange school, he quickly meets Yuri and, after giving her the nickname Yurippe, the two begin to plan out their fight against god. That is, if they can figure out how to deal with the student council president...

When you think of the plot series of Angel Beats some how it just translates right away into The Melancholy of Haruhi Suzumiya.  The whole entire feeling to the series is similar with a group of kids in a school setting fights against supernatural phenomenon.  The lead heroines are spitting images of each other putting on a gutsy attitude while leading the protagonist around in a world completely different from what they are used to.

Recent high school transfer student Hasegawa Kodaka is pathetically inept at making friends. Kodaka is an outcast, with his natural blonde hair which he inherited from his deceased English mother, and his unpleasant, fierce gaze. When he comes across the brash loner Mikazuki Yozora, who typically chats with her imaginary friend, the two outsiders become the unlikeliest of allies. Realizing that they have no hope of a normal social life, the two rejects decide to form a group called "The Neighbors Club" in order to make friends and maybe even learn a thing or two about social skills. As luck would have it, five new members join the club who are more socially awkward than they are. Will these quirky misfits ever make normal friends, or are they all doomed to social failure?

Both of these manga focus on an abnormal high school club full of odd members. These clubs rarely end up doing club activities, but when they do, they're usually pretty abstract. Also, both Kyon and Kodaka have to deal with the strange females in their group, although they usually would prefer not to get involved.

Both series revolve around a hyperactive girl who pulls this normal guy into her crazy antics. The two of them are joined by a bunch of (mostly female) odd friends. Those characters are quite similar between those two series (most likely one was inspired by the other). The kye differences would be that Kebukurohatsu, Zensekai Yuki! features more fanservice and lots of otaku related content, while Melancholy of Haruhi Suzumiya has those supernatural things going on. If you read one and liked it, you might  as well try reading the other one too.

Two months have passed since the nefarious events surrounding the latest Nine School Competition, and its cerebral counterpart, the Thesis Competition, is fast approaching. Helping out First High with the event, Tatsuya will surely have his work cut out for him even if everything goes according to plan. Of course, nothing ever does, which might explain the letter from Maya Yotsuba containing a curious request: to assist in the capture of Gongjin Zhou, one of the masterminds behind the recent Parasidoll incident. Tatsuya and Miyuki depart for Kyoto, where they'll have to keep their wits about them to safely navigate the hidden schemes and shadowy conflicts that lurk just beneath the surface of the ancient capital!

April, 2096. Despite all the commotion they were involved in, Tatsuya and Miyuki have safely advanced to become second years. In light of all of Tatsuya's accomplishments, a new curriculum known as the Magical Engineering Course has been established, granting him a new place in school. With his new classes and position as acting student council Vice President, Tatsuya is certain that this year for sure, he'll be able to enjoy a peaceful time at school with his sister...until three new students from elite Numbered families raise hell as first years!!

Miyuki's classmate Shizuku Kitayama is on her way to study abroad. For magicians, this is normally impossible, since allowing the genes of someone who can use magic outside their home country's borders is tantamount to giving up national secrets. But it's allowed to happen in one case-exchange programs. And that's how Angelina has arrived in Japan from the USNA to study at First High. But it seems she's a part of something much bigger than a simple cultural exchange!