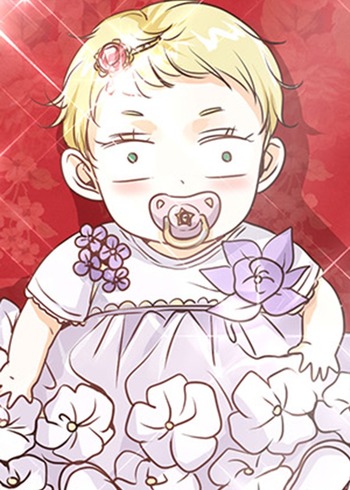 Yet another isekai manhwa where the FL reincarnates into the body of a toddler who is destined to become empress. That one-liner is practically the standard for this sub-genre so an author has to create something that makes a manhwa stand out from its peers. Unfortunately, Matchmaking Baby Princess is very very limited in its execution and introduces a host of characters that merely serve as a backdrop to its FL.

Without the FLs continuous commentary and antics in the world, all the other characters would look like washed out, generic extras more suited for a crowd scene inserted once every 30 chapters. The plot is non-existent and she has little to no reason to be there except to cause chaos and get people to fall in love with her aunt, who's adamant to stay unmarried until her death.

The art style plays a big part in why I couldn't get into this manga. I feel like the artist's experience is in cover art, with overly detailed scenes and angelic faces, cell-shaded hair and a familiarity with the human anatomy. You could see it in some frames, making an appearance and it kinda jolts me out of the experience. Idk it's just not my cup of tea and as hard as I tried, I couldn't get over that at all.

I feel like the only saving grace of this manhwa is its humor which is...different from what I'm accustomed to. I think it's best experienced if you read it yourself, to check if the humor aligns with what makes you laugh. Didn't make me laugh at all so you already know I dropped this faster than Taylor Swift drops albums.

What is the purpose of this manhwa? In what way is it trying to entertain us? The purported purpose is to have Eryl do some matchmaking--primarily to set feir aunt Lucinda up with a nice, non-emperor person. But the matchmaking is so dull and weakly portrayed that it entirely fails as a narrative hook. The biggest problem with it is that most/all of the near-romance scenes occur without any intervention on Eryl's part, without any agency on Eryl's part. Like, fe just watched from the sidelines as Alec or others did things which they would've done anyway. There are a few chapters (ch. 16, 22) that briefly tease at Eryl finally actually getting around to doing some matchmaking, but then they almost immediately drop that subplot without actually getting into it. It's frustrating.

The true purpose of the manhwa, the aspect that is supposed to hook the readers, is seeing people fawning over this young infant (or young child, after the time skip). In other words, it's a standard dotey-dotey comic with all of the shallowness and lack of direction that occurs all too frequently in that genre. The main reason why this "adorability" aspect doesn't work for me is that Eryl's mental state feels too immature and stupid for how old fe is supposed to be mentally. Fe gets excited about childish things like chocolate or sitting on someone's shoulders or sucking on a pacifier. And then, like a child, fe lacks in patience and gets fussy if things don't go feir way. Fe throws tantrums and shit. Sure, fe likes admiring hot guys and thinks things through more than an actual child would be able to, but that honestly just makes feir childishness stand out all the more and feel that much more unacceptable.

Every once in a while, maybe once per chapter, there are some panels set apart from the others, with flowers framing them and with much more detail to them. The artwork for those panels is pretty nice, but the art in the rest of the panels is a lot less impressive. The characters can feel stiff and simplistic. There are also a lot of ugly facial contortions (used for humorous effect) that sometimes don't land qute right. Though honestly, the attempts at humor in general often feel too meta or something and don't land very well for me.

Dropped. I thought the description of the story when referring to the uncle as a "tyrant" was supposed to be for humorous effect, i.e. he is cold to others and not easily approachable. But he is LITERALLY a tyrant. He went to WAR with an actual country just so he could gift that country to his niece as a birthday present. Wtf? And no one calls him out on this! Not even the protagonist, who's supposed to be a THIRTY year old from the REPUBLIC OF KOREA! It's just laughed off in story as "haha, the emperor is so doting towards his niece."

The story is nonexistent. Despite the title, the protagonist is barely a matchmaker. The story is mainly about her shenanigans as a baby. WHY does the protagonist act so childish? I understand if she was just pretending, but she literally acts like a child, even though she is a transmigrator. The author should have made her an actual child in that case, not an adult in a kid's body. The other characters are flat, cardboard cutouts. Forgettable at worst, boring at best. The story TRIES to introduce other love interests for the aunt, but it's SO OBVIOUS she will end up with the emperor. The art is okay, but the semi-realistic art style is too jarring for this comic and makes it worse to read.

I am really loving this. FL is really funny and cute I just wish I could hug her. She is one of the cutest babies in webtoons ever!! I also like the whole matchmaking thing she does. OFC this is an isekai manhwa so the basic story is FL being reincarnated but that's actually the whole point! Don't we wanna read isekai webtoons coz we enjoy the whole reincarnation and second chance theme? Well this is also the same. As for me no matter how many isekai manhwas I read it's never enough lol so ngl eventhough there is nothing really new about this series I still enjoy it. Specially art is just amazing so gotta appreciate the artist's efforts. Anyways if you enjoy isekai webtoons U gotta give this comady cute and fluffy webtoon a try!