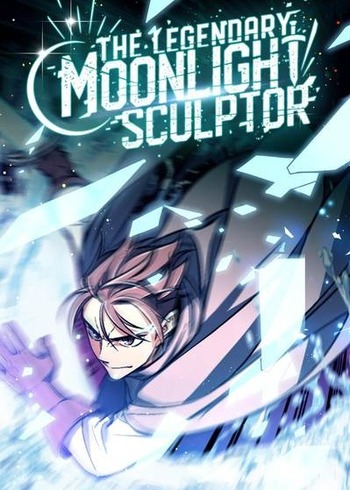 This manga was the best manga I've ever read. After dismissing it a few times, I finally got a solid recommendation and picked it up. After the first couple chapters I realized it was gold! Funny, edgy, hip solid story line, amazing art, fun pacing, character develpoment was sparce,but still intruiging.

I found my stomach aching from laughing at the characters in the story, I found myself rooting for the protagonist in a way that was uncommon for other stories. While season one was an over all better story, season two was a rollercoaster of peaks and valleys. Excellent, and underrated read.

Weed is an entertaining character--a duplicitous penny-pincher who is outwardly charismatic and friendly, but inwardly only thinks about how fe can use people to maximize feir own benefits. People also underestimate fem because fe has leveled up non-combat skills like Cooking, Fishing, Sewing, Blacksmithing, and Sculpting. My favorite sections are feir travels with Mapan (chs. 9-19) and feir powering up of skills (chs. 40-43, 46-49). The Morata quest (chs. 21-37) is a duller point in the series, though the quests after chapter 49 aren't exactly the best either--several of them just feel like excuses to have fem fight alongside some of the new side characters (namely, Hwa-Ryung, Zephyr, and the Swordnoobs) and to have the old party make an appearance. The tomb-building quest (ch. 59-61) was building up to be something cool, but then just ended somewhat anticlimactically. The Swordnoob subplot is alright, but not great or anything. I'm usually just wanting to get through those sections and get back to the parts with Weed. I liked Mapan as a supporting character (and I'm glad fe didn't outstay feir welcome), Van Hawk is pretty adorable, and Maylon seems like fe'll be a cute addition to the ensemble. It made sense for Dain to not play a role during this second season of the story because of feir circumstances, but I felt that Seo Yoon should've been included in at least a subplot or something (rather than just getting a scene here or there). The Dark Gamer Association has been introduced, but so far they haven't played a role in anything.

Summary: I like the story. It has some flaws, but is still very entertaining and I look forward to reading Season 3.

Binged the whole series and it's persistently annoying to see the protagonist's lack of appreciation for his skill. Not sure what kind of RPGs the writer has experienced but production skills would be profitable when making such unique items, yet he disses being a sculptor every chance he gets and how unprofitable it is. I find that interesting - how can you make nearly 100% profit from carving gems with little time, or creating a statue that becomes a major tourist attraction in less than a day, and say it has no monetary value?? He finds out he can improve gear by adding engraving to metal armour yet doesn't monetise that or perform it ever again, despite how "money obsessed" he's portrayed.

The art changes with each part and it's nothing particularly noteworthy. It was more unique in part 1.

The characters around the MC are... just there. There's not much binding them to the MC, he just uses them every now and then when he needs help hunting or with some quests. You get to see a glimpse of who those characters are outside of the game, but it really is just a glimpse that doesn't actually connect to the story or MC. We're shown one is a famous singer irl and then that's the end of that, seems kind of unnecessary. You get shown the Dark Gamers and he supposedly joins them... and then nothing happens with them? The dark knight probably has the most chracter development and the MC can even summon him without the necklace! But going forward he still summons him with the necklace like nothing changed lol so what was the point of that?

I am just mentioning the downsides because they stand out so much, but it's still worth a read if you enjoy RPG or fantasy genres. It's different in that it focuses less on combat compared to every other manga/manhwa of the genre.