The Legend of Zelda: The Wind Waker - Link's Logbook - Reviews 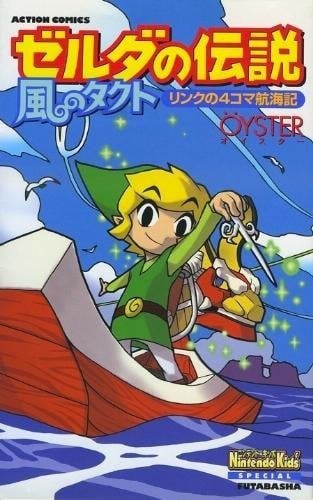 This is really funny! I actually played wind waker and there were many times that seemed like they could have been created funnier, this is what it needed. All the game was missing was them actually putting these little jokes into the game itself. The log has been created pretty much like a blooper real of antics that happen along his adventure from him drooling from the thought of his favorite soup, to characters doing slightly different things, to little inside jokes from the book and the game. It even has times where you see what’s going on in other parts of the world and the things that are happening are really funny.

Sometimes the writing is a little inconsistent sadly. There are times when Link ends up talking or looking like he is talking and then other times he will only move around to answer the other characters like he normally does in the games. There are also times that Link or the other characters look incredible stupid. It’s great for most jokes but one or two seem to fall flat on the delivery. Not sure if it was the translations or just the joke in general though.

I know I end up talking about the game in this review but in order to look at this, you do have to know the game. That’s one problem with it. If you have never even seen a walkthrough of the game, this will probably be confusing to you and might even spoil the game a bit. It seems like it was created to be sold with it and for you to read it as you play the game because almost every page is like a scene from it. It also ends right before the epic fight when I wish that it would of showed a little bit more.

The artwork is rather minimalist without really any shading but I like it this way. It’s almost more comedic in a way and fits with the feel of the game.

I love reading this and gave me a different view of the game that I really enjoy. If you like Legend of Zelda, you would probably like this.

I haven't played this game, so I'm sure I'm missing out on a lot of the inside jokes, but I still found it pretty cutesy-funny. It's basically retelling portions of the game (I assume), but with parody gags. And like most gags, they're built around people acting in odd ways, with the added advantage of being able to make jokes about the inherent oddness of video game mannerisms. The art isn't very good.