The Legend of Zelda: The Minish Cap - Reviews 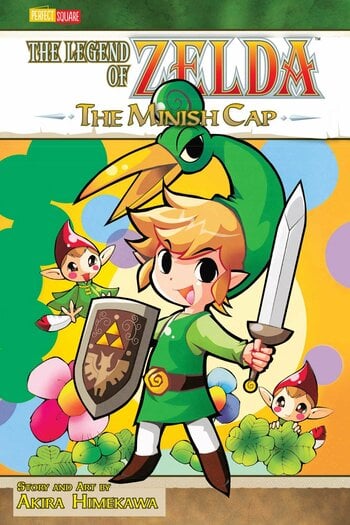 This is actually a manga I watched during testing that my friend lent to me. I thought it was pretty good.

Story- I gave the story an 8 because the story wasn't too original since it's kind of a hero that needs to save the world type story. It's not to original but that's the main objective of The Legend of Zelda series.

Art- I gave the art a 10 because I like that kind of art style that doesn't look old because I don't like anime styles that look old. You might but I like anime with vivid colors that are light like Happiness Pretty Cure or Aikatsu.

Characters-  This manga revealed to me that even Link, has a perverted side. The characters were pretty good, I didn't like Enslo though that much, he was kind of rude.

Overall- I gave this a 9 overall, hopefully you, the reader, found his helpful and you enjoy     the manag if you're planning to read it.

Cutesy artwork. Though the eyes can seem somewhat expressive, the mouths feel simplistic and tacked on. Usually just drawn in such a way that they could best be described as "open."

With its no-nonsense pacing, it doesn't allow the plot to soak over us and marinate. Considering it's based on a game that can take hours of playthrough time, where you end up immersed in the world and its challenges, it just ends up feeling far too rushed. But more importantly, it doesn't adequately capture the aspect that makes Zelda games so fun--the puzzles. I'm not sure how they could've done a better job showing Link grappling with what steps to take next or how to solve certain problems, but they didn't even seem to try to include that aspect of the games. The manga also showed the monsters being released from the box, but didn't really delve into the consequences of that. It also doesn't explain why Link can understand animal speech while fe's small, and that doesn't seem like a natural consequence of shrinking down.

They were just going over the overarching plot, which (like with most Zelda games) is pretty well put together. The final goal is presented in the beginning--fixing the Holy Sword--and to do that fe has the sub-goals of meeting with the Picori and then gathering the Four Elements. Each element is kept in a different temple and sometimes there is a sub-sub-goal of finding how to get to these temples. The villain is Vaati, who is seeking the Force, and Link is aided along the way by feir talking hat Ezlo. Fe also gathers special magical items that help in various ways (and in the gameplay, are part of the problem-solving aspect of the game).