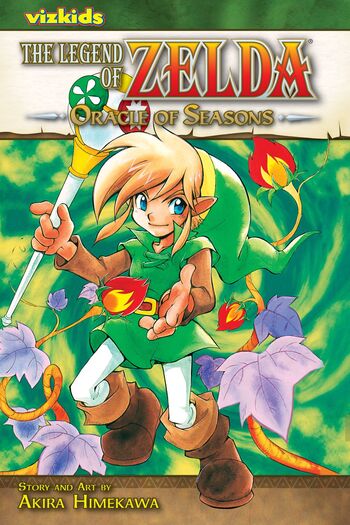 If you're looking for anime similar to The Legend of Zelda: Oracle of Seasons, you might like these titles.

Pokemon Mystery Dungeon: Team Go-Getters Out of the Gate!

Imagine what it would be like to awaken from slumber, only to discover that… you have become a Pokemon?! For one young boy, what could very well be considered his wildest dream has come true – he’s woken up in the body of a Squirtle! In addition to his new turtle exterior, he can also understand the language of the Pokemon around him. In this strange new world, teams of Pokemon have begun teaming up to help rescue other Pokemon in trouble; so with the help of Chikorita and Charmander, the trio form Team Go-Getters and set off to find the lost Pichu! But Gengar and Team Meanies stand in the way. Can Team Go-Getters save the day, as well as themselves?

Claude Kenni just wanted to shine free of his military father's shadow, a desire that made him take unnecessary risks. One of those risks whisked him off to an unknown planet full of monsters and magic. There, he met Rena Lanford, an energetic girl with mysterious abilites who believes he is a hero of legend. Soon, they're off on an expedition to find the cause of the monsters and the truth behind the sorcery globe all while hiding the technology he brought with him. Looks like Claude's got bigger shoes to fill than his father's!

One night, the legendary mustached plumber Mario is playing a video game when suddenly, the in-game character Princess Peach emerges from his TV set! Then, in the midst of the confusion, another invader from the game world follows: the evil Bowser, who quickly steals Peach away and returns from whence he came. After a series of events Mario and Luigi soon find their way to the Mushroom Kingdom for the adventure of a lifetime. With Hammer Bros and Piranha Plants around every corner, the duo must now find the Princess before Bowser takes her as his bride – and to do so they first must find three legendary items: the Mushroom of Strength, the Flower of Courage, and the Star of Invincibility.