The Legend of Zelda: Ocarina of Time - Reviews 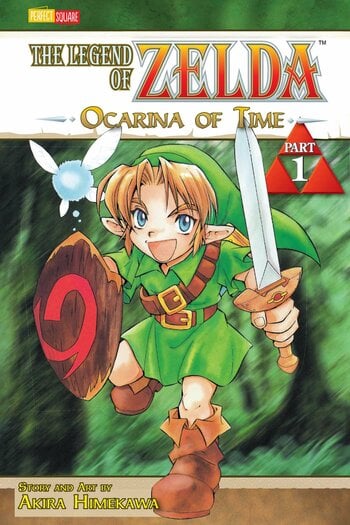 This manga, illustrated and adapted by Akira Himekawa in 1998, came out in English quite a few years ago as part of the 'Viz Kids' range. There are tonnes and tonnes of Zelda manga, and nearly all of them see some form of official English translation. Since Ocarina of Time is my favourite of all the Zelda games, I picked up both volumes when Forbidden Planet was selling them for dirt cheap a few years ago. To be honest, though I wouldn't say I regretted the purchase, or was incredibly elated. They were just 'okay'. But I read them again earlier tonight and was pleasantly surprised.

Now, whenever any piece of media is adapted, be it a book to a movie, a movie to a video-game, vice-versa, it's going to suffer for it, and OoT suffered a little bit in this regard.

The two volumes are split into the 'child arc' (going into the Deku Tree, meeting Princess Zelda, and getting the three Spiritual Stones) and the 'adult arc' (time-skipping seven years into the future, going through all the temples, and saving the kingdom from Ganondorf). Naturally, the more grinding aspects of the games (the temples) are quickly dealt with, as of course it'd be boring as all hell to see Link dragged back to the beginning of temples over and over after unlucky run-ins with Wall-Masters. Or the poor fairy boy wracking his brains over quite how to work out the puzzles in the Water Temple.

On the one hand, this is a good thing, allowing you to process the story a lot quicker, but on the other hand, it gives it a feeling of slightly rushed pacing.

The artwork is perfectly fine in this, mimicking the game's art style almost perfectly, so no complaints there.

However, the 'child arc' kind of bugged me ever since I read this manga. It seemed to be dedicated to little side-stories of Link and Princess Zelda that were meant to draw an 'aww, that's so cute!' reaction from its audience rather than be meaningful. But on a second glance, this isn't the case. They're sweet stories, yes, but there is character development there. Want to find out why Link wears his earring? There's a little piece of character development for you there.

The second arc gets straight into the butt-kicking, and proved to be an extremely enjoyable read. Any pacing issues it had can be forgiven here, because the ending fight was so good.

All in all, I'm giving this one a 6.5/10. I used to think it was a fairly bad adaptation of the Zelda games that put too much of a focus on the kid Link and Zelda stories, but it's not so bad, and the second volume more than makes up for the first one. And most of all, I love the artwork in it. I love how Akira Himekawa (both of them - it's a pseudonym for two female artists) writes the story of the games in a very comprehensive manner.