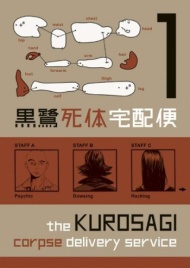 Overview Not for the weak of heart, Kurosagi Corpse Delivery Service is a 13 volume (currently 11 published) dark comedy from the mind of Eiji Otsuka, creator of MPD Psycho. The story focuses around a group of graduates of a Buddhist college who start a 'club' to help them make some money. Each of the five group members has a specific talent; Ao Sasaki is a skilled hacker and the 'head' of the Kurosagi Corpse Delivery Service, Kuro Karatsu can talk to the dead, Mako Numata can dowse (only for bodies though!), Keiko Makino is a trained embalmer and Yuji Yata can channel aliens, one specifically - the puppet on his hand - by the name of Kere Ellis. Between them, they make up The Kurosagi Corpse Delivery Service - A crack team of 'delivery-men' who will find a corpse and take it to wherever its spirit wishes to go... for a small fee of course. Story - 8/10 - Slow to get into the main plot, but with an enjoyable lead up to it. The plot of Kurosagi starts off with a very 'monster of the week' feel, although in this case the monsters are corpses, with each chapter of a volume generally focusing on one 'delivery'. There are exceptions to this rule of course and later on (around volume 6) a definite plot begins to emerge beneath the various 'deliveries'. The series has recurring characters throughout, each with their own unique charms, some not so charming. From the Shirosagi Cleaning Service, rivals of Kurosagi, to the welfare officer Tooru Sasayama (whom MPD fans may or may not recognise due to his age) who spots our heroes jobs occasionally, each support character is unique in personality adding to a rich tapestry of humanity. Art - 8/10 - A very distinctive style with stunning attention to detail The art style, while by a different artist to MPD, is surprisingly similar in some ways. The subject matter, for one, is very similar. If you can't stand the sight of corpses and other grotesque matter - don't read this. Seriously. But if, like me, you're fond of the macabre, you will appreciate the fine amounts of detail that are put into the cells. Backdrops, costumes and corpses are beautifully realistic, as manga art goes, while characters take on the pallid and slightly unnerving look they had in MPD. Characters - 10/10 - The driving force of the manga The characters of Kurosagi are what really make this manga such a treasure. Interactions between the main 5 specifically make them all the more lovable. Numata makes constant references to pop culture and always has a get-rich-quick scheme, none of which ever work. Kere Ellis will mock Numata for his failures in almost every volume (though for the first couple he is little more than a crude sock puppet) and Numata will exact his rage on the terrified and timid Yata, who insists it's nothing to do with him. The comedic value provided by these 2(.5) serves to ease any discomfort caused by the grim nature of the plot. Sasaki exerts her power in a cool and collected way that leaves the characters quivering in fear and the reader quivering in laughter while lovely Lolita Makino provides the much needed kawaii factor into the team, combined with a disturbingly strong intellect and Western attitude. Karatsu is the most interesting character, in terms of explanation at any rate. Each character has their own little back story that is made known to the reader later on in the series. Spoilers aside, Karatsu doesn't seem to have one, though he later becomes a focal plot point. While Karatsu has no interesting back story, and seems to do his utmost to avoid getting to friendly with the Kurosagi team, he has an essence of actual humanity about him, you can empathise with him and understand why he acts the way he does without needing to be told. In this respect, he is a very rare character.   So, that's Kurosagi. Dark, funny, emotionally stirring at times and generally, the most beautifully bleak manga I've ever read - Offering a slice of real life that's not often seen in manga, everyone dies - and everyone makes money... some in more 'interesting' ways than others.   Overall Score: 9/10  - A solid, attention-grabbing series with a lot of promise. 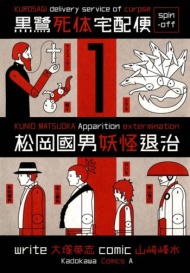