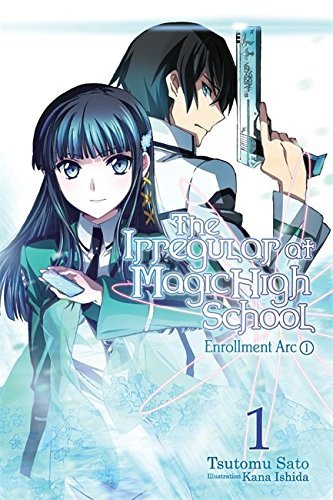 uAs usual, the book is better than the anime, but in spite of that, the anime does a fairly good job of following the book.  There is just a little too much left out in the series that can cause confusion or misunderstanding to anyone watching the show without having read the books.  Miyuki for example in several scenes clearly is concerned for her brother and his inability to understand social cues as well as his poor ability to socialize at all.  Though it never comes out and says it, it implies even stronger in the books that not only Tatsuya but several characters are very likely on the autistic spectrum.  Given the nature of his power as well as his aunts, it is implied very vaguely, that both were probably autistic and suffered lack of emotional expression issues even before the magical operations were performed on them.  You will be privy to many more subtle cues about his true weaknesses in the book.  There are several characters whom even Tatsuya either fears, worries about upsetting, or struggles to combat when it comes to fighting.  Some are even technically less powerful then he is but their powers and fighting skills are more compatible against each other.  This is emphasized and experienced more strongly and thoroughly in the books than the anime.  And as such, it provides Tatsuya with greater balance and humiity.  The result is you can understand he is not the super overpowered character with no emotions everyone seems to think he is.  Yet there is a question hanging by the suggestion at some point that his powers may continue to grow.

He is in fact filled with emotions and even very strong emotions at that and this is well after the operation that supposedly destroyed or completely suppressed any and all emotions especially strong ones.  It says it flat out in at least one spot in the book that he has strong emotions and it is strongly implied several other times even by Miyuki as she witnesses him.

The biggest issues with the book is either poor grammar by the author or poor translation.  Yet even without the issues of if it is the translation there are too many instances of repeatitive catch phrases that make can make a reader sick of seeing them. As implied by some reviewers, there is a problem with the over complex and overly convoluted explanations to the principles behind magic.  As if that is not bad enough, sometimes these tedious explanations are repeated.

Aside from that, it is a good novel series with a fresh fairly original feel and feel good well thought out settings that can totally immerse you in a new imaginative world with lots of its own rules and properties.  There are plenty of good strong characters and character interactions filling the pages too.  There are often fresh challenges and mysteries to keep you glued to the pages.  There are several long term story lines dotted through out the series.  Some enemies though seem a bit too OP for Tatsuya and compared to him and other magicians of his class.  It is made pretty clear why Miyuki is so enraptured with her brother and why she feels she owes him so much as you read the books.  Part of that appeal is the fact that her whole life she was told he was useless and she herself treated him like crap.  Thus in my mind at least proving even more so the only one who ever loved Tatsuya unconditionally from the start of their very first meeting is Mayumi.  It is also revealed how he got his particular skills and from whom he got them genetically speaking.  By the same token, this must prove beyond doubt that no matter what rumors float about that Tatsuya may have a different mother, that he and Miyuki must have the same father or their abilities makes far less sense.

Several mysteries and enlightenments color the series and can be frustrating as it teases you about when and how those will end.  One begins to unravel soon after the seniors from the first story arcs graduate.  One of Tatsuya's friends learns of at least one of his true identities aka what family he is part of and through a suggestion of fear she wisely keeps it to herself.  Others strongly suspect or even have some evidence but can not say for sure, but the one finds out for sure.  These various subtle degrees of his secret world unraveling are part of the  lure and charm that keeps a reader interested. There are some Robin Hood like rooting moments in the story too where a reader might feel compelled to cheer them on as if they were the underdogs in a local football game but with conviction, strong heart, determination, and unbelievable discipline to train and improve. At times it may even be hard to tell who are allies and who are enemies and whether they swap around.

If the series provided a little more information as available in the books the series might not confuse people so much.  No one knows what a BS magician is from the series, but from the novels you will find out.  That is not a good way to adapt a novel series.  The novel series is gripping to say the least. Some of the other characters and side stories have almost as much or more airs of mystery and secrecy as the Shibas.  The bit on Morisaki shows a different side which he seems to conceal from his classmates at school. There is a whole new side to Eimi.  Honoka expresses herself much more strongly and more so towards a certain someone than anyone else. Ichihara has her own mystique and hidden backstory.  Kityama plays a crucial role in several ways and we meet her family.  Her family also plays an important role frequently.  Yoshida grows and develops into a new and independent man of his own power.  Shibata has a unique skill critical at several points.  Mayumi keeps coming into the story strongly and her connection with a certain person seems to grow much to her chagrin or at least she is in denial of her own feelings.  Nakajo has more impact and power than hinted at in the show which is so played down you might miss it if you never read the books.  Ichijo is a much cooler guy then just the self centered egotistical rival seen in the series.  George ironically has a similar back story experience to Tatsuya.  And his connection to Ichijo is unvealed in full.  Jumonji stands out much better and as a respected master clan rep than the tip of the iceburg seen in the series.  There is much more to the mysterious Zhou than touched upon in the show.  Sawaki becomes a much more central figure in the later chapters and volumes and his standing is much higher and stronger than suggested in the show or early volumes.  Isori stands out as a star in several areas and more so after the seniors graduate.  Fujibayashi is almost like a unclaimed older sister or best friend and is constantly working closely with the Shibas or interacting officially with the miiltary or off the books as a friend.  Kudou steps in and makes a strong showing as a character. More background is unveiled about Maya to the point a reader might start to sympathize with her but not approve of her actions despite her backstory.  Every character comes off the page stronger in the book.

Often in the series you barely get a glimpse of characters before they are brushed aside or stand on the backstage like a back up singer.  Many new characters are introduced.  The ebb and flow of the student council, extracurricular panel, and security group are played out like some soap drama.  More rivalries some good and bad and some understandable and some undeserved are brought out.  It is simply more indepth.  The show only reveals the surface.  It is not that the book's story was modified for the show or followed exactly.  What is in the book is more or less in the show, but it's more like watching a political ad than understanding the real story.  You are witness to a fraction of what is there.  It is a good adaption but at the same time it is abit incomplete and somewhat compressed more than it needed to be.  More explanation of codes like BS magician and less of the technical jargon behind magic would have played out much better.  Another 12 episodes for the chapters it adapted would work better too and put the show at a more reasonable pace so that the viewer could ingest the full story and not feel rushed.  Of course they need another 2 or 3 seasons for what is published and yet to be for the entire series.  I highly recommend the books especially if you watched the series and felt confused or you liked the series alot but would love to know more and even if you never watched the show, it is a good book.