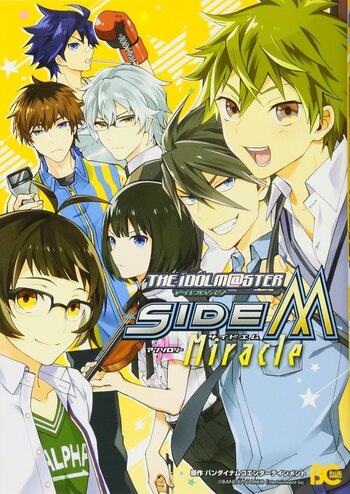 If you're looking for anime similar to The [email protected] SideM Anthology: Miracle, you might like these titles.

Second season of Tsukipro the Animation.

22/7 was revived for the fans on December 24th, which was their day of formation.The next day, when eight people came to the office, the Wall was completely revived, and the mystery only deepened. To dispel the disturbing feelings, Sakura proposes to have a Christmas party to celebrate the reunion.

Fifteen years ago, the legendary idol group Shonen Hollywood stole the hearts of thousands adoring fans. Their performance at the famous Hollywood Tokyo Theater is the stuff of legend, and now a new group of boys is determined to become the next generation of this famed super group. Ikuma, Kakeru, Shun, Kira, and Daiki will train day and night as they chase their dreams on the road to superstardom!

The plot takes place 15 years after the original light novel's story in a fictional theater called Hollywood Tokyo in Harajuku. The five aspiring members, Kakeru, Kira, Ikuma, Daiki and Shun, work together to develop their talents as idols.