The Hero Is Overpowered But Overly Cautious - Recommendations

Alt title: This Hero is Invincible but "Too Cautious" 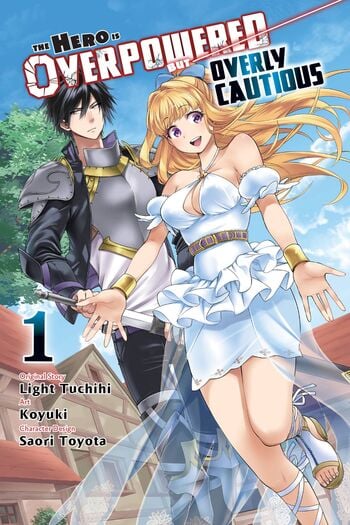 If you're looking for manga similar to The Hero Is Overpowered But Overly Cautious, you might like these titles.

Growth cheats? Infinite magic power? The ability to utilize all archetypes? What's the point if instant death ends everything with a single attack? High school senior Yogiri Takatou was on a school field trip when he woke up to a dragon assaulting his sightseeing bus, with the only ones still on the bus being him and his female classmate, the panicking Tomochika Dannoura. Apparently the rest of his classmates had been given special powers by Sion, a woman who introduced herself as Sage, and escaped from the dragon, leaving those that hadn't received any special powers behind as dragon bait. And so Yogiri was thrown into a parallel universe full of danger, with no idea of what just happened. Likewise, Sion had no way of knowing just what kind of being she had summoned to her world.

Banaza was summoned to The Magical Kingdom of Kryrode as a Hero Candidate, however, due to having only the abilities of a regular citizen, he was treated as a disqualified Hero. He, who was originally supposed to be returned to his original world, became unable to return due to the Magical Kingdom’s mistake, and inevitably, had to live in this world. However, the moment he became Lv2, Banaza acquired every attainable skill and magical ability, and he became a Super-Cheat with Stats that transcend normal limits! Even so, Banaza , who does things at his own pace with an easygoing smile, takes Lys of the Demon race as his wife, and fully enjoys his newlywed life. He then changes his name to Furio and leads an even more laid-back life! However, chaos is in store for the Furio household...

Waking up in a strange new place with no memory of his past life, Kelvin learns that he’s bartered away those very memories in exchange for powerful new abilities during his recent transmigration. Heading out into a whole new world as a Summoner — with his first Follower being the very goddess who brought him over! — Kelvin begins his new life as an adventurer, and it isn’t long before he discovers his hidden disposition as a battle junkie. From the Black Knight of the Ancient Castle of Evil Spirits to the demon within the Hidden Cave of the Sage, he revels in the fight against one formidable foe after another. Join this OP adventurer in an exhilarating and epic saga as he and his allies carve their way into the annals of history!

The Magic in this Other World is Too Far Behind!