The God & the Flightless Messenger - Recommendations 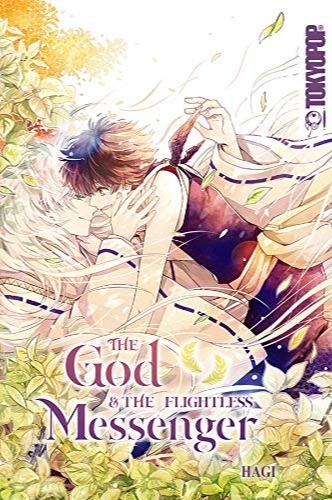 If you're looking for manga similar to The God & the Flightless Messenger, you might like these titles.

Years ago, Izumo saved a child named Ryuta from a youkai. After promising to return and adventure with him in the future, Izumo leaves Ryuta and forgets about his promise. By chance, Ryuta meets Izumo again. Over the years, Ryuta never forgot about Izumo and trained hard to prepare for their adventures. Izumo claims to have no memory of his promise or Ryuta, but that doesn't stop Ryuta from embarking on a journey with Izumo!

Both mangas revolve around Japanese mythology and youkai and both follow the "childchood promise" theme. Main characters follow the "calm and collected, who's cold at first but slowly starts to accept his feelings" & "clumsy but doing his best, bright and hardworking" trope. If you enjoy sweet bl romance I think both will be to your liking!

Kizakura Suika is a middle school student who, due to tragic circumstances, lives alone. Every day, she goes by an old shrine, which is watched after by Yorozu, a boy who has been her friend since she was very little. One evening, during an encounter with the god of death, Suika discovers Yorozu's true nature as the god of the old shrine! Now that Suika knows the truth, she will either have to marry Yorozu or lose him forever!

When Haruma found a dilapidated shrine, he remembered his late grandmother’s warnings about always showing respects to the gods and fearing the repercussions, decided to clean it and leave an offering behind. Later that night, the god of the shrine, Aoba, pays him a visit…

As a child, Usagi Mitsuki made a promise to a crying girl that when she grows up he will marry her. When he finally becomes an adult, she appears again to make good on his promise, but much to Usagi's surprise "she" is a not only a he, but his family's shrine's goddess!

Lin Lu, an otaku, wakes up one day to find a strange beauty in his bed. The handsome stranger claims to be a River God and begs Lin Lu to adopt him.

Yuto is a typical high school student whose family just so happens to have had a long line of sorcerers as members. While in the family storage shed, he accidentally awakens a god who was sealed in a sword hundreds of years ago. Now, if only this mysterious god could remember who he is! Yuto names this extremely good-looking spirit, Jade. Stuck with an amnesiac god who's strangely attached to him, Yuto begins a clamorous life of high school, adventure and attraction.

Shiina Momose doesn't believe in fortune telling and the occult, but for some reason, she can destroy anything with a touch. One day while on her way to school, a young man approaches her and claims to be a God. Furthermore, he believes that he was guided towards her and for that reason he has become convinced that she should become his first follower! Naturally, Momose refuses; but when strange things began to happen... she can not do something about it!

With the protection of that prediction, the days of protecting him has started! A love comedy of the god and human who were mysteriously put together!