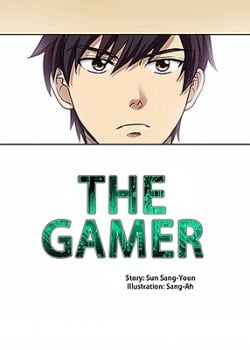 Story
In a world where chakra/chi gives certain people special powers we follow Jee-Han Han who has the unusual ''Gamer ability''.
Because of this ability his entire life is like a role-playing game where he has to do quests and/or hunt in order to gain EXP and level up.

Story...well.. there is no backbone plot and this is its biggest downfall. It is mostly grinding and when a story and the action starts to develop it isnt good which has lead to two breaks (hiatus) for the author. The author doesn't seem to be able to write a story or action scenes and the artwork isn't well either in the rare action scenes.

In my opinion the author should have taken a different approach and left out the whole backstory of the Abyss and action and focussed on a comedy / gag manga about a guy finding out he has game powers. Because The Gamer excells at comedy, especially the start when he receives ridicuolous powers and quests like getting groceries and crafting at the art class at school. 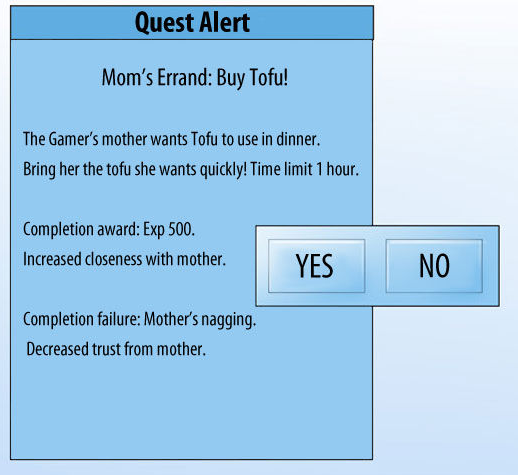 Art
The manga is in full color which is always a plus for myself. The character artwork is very good, since it is a comedy the characters are drawn in the chibi style or a simpler form, which is not something I object against. But the art really shines in the more serious moments, see the pictures below.
The only drawback on the artwork are the backgrounds, they are usually lacking or real basic. And when the action finally starts the artworks seem to go down a bit unfortunately. 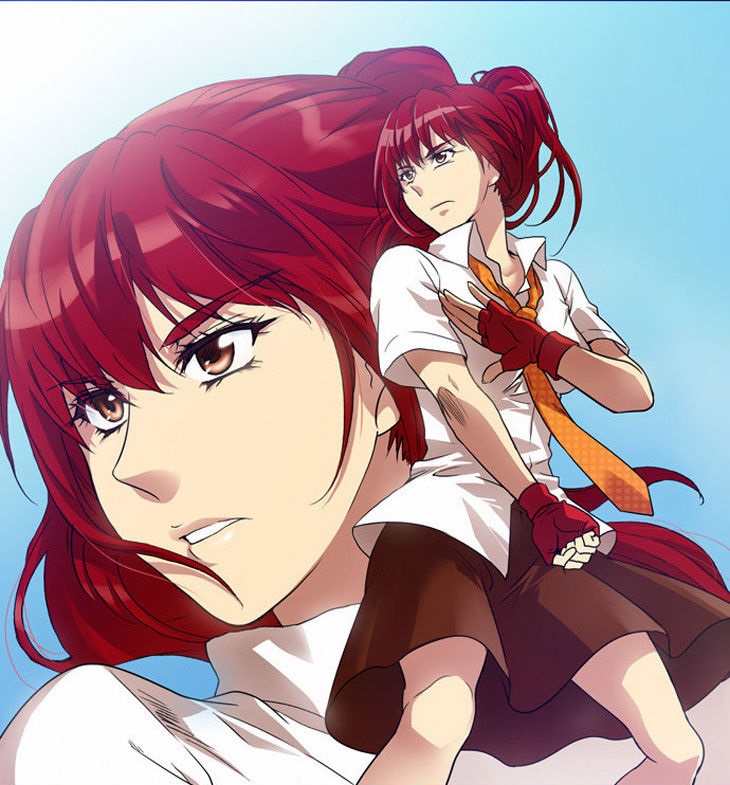 Not much to say here, except for Jee-Han and Sung-Il not much of the other characters have been much in the picture. Even the backgrounds for Jee-Han and Sun-Il haven't been explored yet.
Jee-Han is the main character, smart, funny and his gamer ability lets him grow at an extreme speed.
Sung-Il is Jee-Han's best friend and helps him train.
Sung-Ah is sick and...well not much happened with her yet.
Shi-Yun is a strong female, aggressive and becomes the tsundere of the story, altough she dissappears a lot from the webcomic.
Lolikeano is the lolli witch, because every story needs a lolli.

Conclusion
This story started out very promising but it kept dragging on a bit with the endless grinding, despite that it was still hilarious. Only when the action finally started way, way, way on in the manhwa it started to slip and became less interesting. The main characters were pushed to the sideline while allot of new, not so interesting and very overpowered characters were introduced.

Overall I've given this manhua an 4 out of 5 stars rating because of the not so very interesting and well made action parts. This webcomic should be read as a comedy and not for the story or action.

*Review made when 67 chapters were out*

I like the concept of this story, it's intriguing and entertaining. It's about Han Jee-Han, a video game addict, who's real life turns into a video game. This manga/manhwa almost reminds me of SAO (Sword Art Online), differences being are that Jee-Han isn't trapped in a game his life just became like one, its much funnier, and... maybe another one is that he doesn't have a girlfriend? (Or at least yet anyway)... There is action, humor, and it brings in some sentimentality of what people go through in actual life, not in big ways, but still, it's there. Xp We learn about the Abyss (I think of it as like a shadow world because it's a hidden world within the actual one; the world behind the scenes if you will), we learn about ability and acquired users, magicians/sages/Druids, it's all very in depth... I won't say much anymore for fear of spoiling Xp The author explains well and helps make us understand everything about this world. If you have a fear of not understanding this manga/manhwa because of 'gamer lingo' there are characters who are oblivious as well and in those times that gamer lingo is used explanations are given, which is great for people who don't play a lot of videogames like me Xp their are times when you can be confused as to what one of the characters are doing but when you find out it's pretty cool.

It's colored! First colored manga/manhwa that I've read, it was a different experience for me. Also, all the pictures were in the middle, I guess that is normal for a colored manga/manhwa? The art is pretty simple and the background is practically non existent, mostly just gradient filled background. The people are acceptable and nice to look at, but no sceneries. So if you like sceneries you might not like The Gamer, for me I like sceneries but the humor and the story make up for it, mostly. The pictures feel 2D most of the time because of lack of background, lack of background doesn't add depth to the world (at least in my eyes). The people are good because of the shadows and proper proportionality. People look 3D but the world sometimes looks 2D. There are some exceptions for the world looking 3D, like when Jee-Han is in a room, or when there is a city scene (sometimes they show buildings and other people). For a web comic and for it being in color it's understandable that the manga/manhwa doesn't have backgrounds but it's still nice to have some sceneries... I'm a little nit picky about art, after all, I'm an artist Xp definitely not a professional artist but stil, I'm nit picky.

This is the main character who is 'The Gamer'. Jee-Han sees titles, names, and levels above everyone's head. His ability is unique in the Abyss. Jee-Han has strong morals (I say this because he doesn't kill anyone), he is clueless about Abyss (more so at the beginning but even still in the 67 chapter: there is a lot to learn), and we basically learn about his powers and Abyss as the story develops. He can raise his stats, learn skills, and can level up, it's very much like a compilation of games that his life becomes. Jee-Han is the funniest character, he's a vediogame nerd who hasn't gone a date... So many funny moments x)

This is Han Jee-Han's bestfriend, they have been friends since they were kids. Sun-Il is preety awesome, he is basically a master of martial arts, even won gold medals in completions. He cares about his friend (perhaps his only friend) Jee-Han very much. He's heir to the clan he is in and helps Jee-Han train.

She is preety cool to, she's in a different clan than Shin Sun-Il. Their isn't a lot of information about her yet... I hope we learn more about her after the 67 chapter :) oh but apparently Hwan Sung-Gon is her enemy...

Suit guy! He wears a black suit and black sunglasses 24/7 it seems. He's the father of Hwan Sung-Ah and at the beginning looked like he was evil/the bad guy. Later he is no longer dubbed the bad guy but I'm skeptical... Not much known about him either.

Daughter of Hwan Sung-Gon and meets Jee-Han on accident. She is the main reason for a couple things that happen... I'm trying to keep it kinda general.... I'll say no more for fear of spoiling Xp

These are the main characters there are some others but they aren't that important I think... Overall Sung San-Young, the author develops his characters very well; you care for the characters, you worry, you want to learn more, it's all pretty trilling ^-^

This manga/manhwa is becoming well developed, has a good story line, and keeps you entertained with humor and action. Honestly I laughed pretty much every chapter X) like the other reviews said this manga/manwha is fast paced. It's easy to get caught up in the story and to keep reading, I literally read all 67 chapters in two days x) guess I got no life >.< anywho! The diction is nice and fits with each of the characters ages, at one point one of the characters said aight (I don't think that's how they spelled it though... hope ya get the gist!) I laughed for a little while because it seemed kind of out of place for him to say that but that was the only thing I've found, in all 67 chapters that I've read, wrong with diction. I recommend reading The Gamer, you'll defiantly get a laugh out of it! Maybe read it in private... I got some weird looks when I was giggling Xp

Hopefully I didn't spoil anything for you, if I did I apologize greatly. Again, sorry for it being so long...

Anywho! Thanks for reading! ^-^

Oh wow. I have no idea why I didn't stumble upon this manga before. Actually since it's korean it's not really called manga? ... Yeah, it's called Manhwa.

It's so good! The story is so amazing and it's something that we all probably at least once wished of.

What if life was a game?

Well it did happen with this guy! The first several chapters will get you in this, and be warned... there's no coming back.

The story is about a guy who suddenly finds out his power... and it's a strange power indeed.

Story is well developed and you will easily go through the pages because it's fast paced and it's not boring! I would LOOOVE if this got adapted into anime. ^-^

Some parts kinda shocked me, for example how professors beat the students D: (this is not really that relevant to the story tho)

They used to do that here in 1950 or something. Was shocked to see this but still the artist made it look funny so I guess that's okay.

Ummm so the art is actually nothing special. But that's granted because it's in full color right?

No, there's nothing bad about the art actually, but there's also nothing good really. No beautiful scenery whatsoever, so if you prefer art over story, this manga manhwa is not for you. But considering the story is very easy to follow and it's fast paced, it doesn't matter to me. Still enjoyable.

Perhaps it's only me? Or it's because it's a web comic?

There are several major characters, and they go perfectly well with the story. I really like the main character! Was kind of confused by their names, but then I found out that they're from Korea because the manga manhwa is from Korea ;D;

I have absolutely no experience with korean comics, but this was a great surprise to me! I really enjoy reading this piece! I didn't read a lot of manga, but this one is one of the better ones I read so far. If you like a story that's easy to read and follow, this manga is for you!

Aaand on that note I shall end my first manga review! I hope all of this makes sense D:

Thank you for reading this review! I hope you can find it useful or something idk

Can't believe its really been 8 years since this started. Thats amazing, and the story telling has only been getting better. This isn't your typical Shonen action plot, but if you just give it a chance I feel like anyone could enjoy it ;)

It was interesting at first but as I continued to read it, it became boring. It also became a bit more of a romace-action webtoon. It could be good for others but for me, it wasn't my cup of tea.