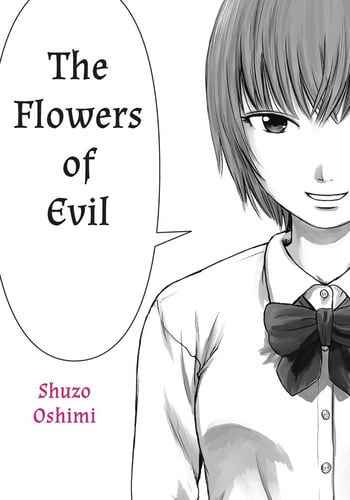 This manga is crazy. I'm sorry, actually, allow me to correct myself, this manga is FUCKING crazy.So you thought School Days was fucked up, you haven't even begun.I'll start with the flaws, because they are apparent. First of all, the story isn't the most original thing you've ever heard of. You have a boy who has a crush on a girl and is forced to make a contract with another girl because he is caught stealing the first girl's underwear. It doesn't take a genius to realize where the romance is going to be placed. The characters aren't the most developed characters ever and they aren't actually very three dimensional. The art is average, which is not a bad thing but it isn't a strength. In fact, if treat the manga as a morally psychological manga, that is based on Les Fleurs du mal, it falls a bit short as the themes aren't expressed with enough emphasis.Still, and I might be overstating this, but I believe this manga has dwelled itself in a specific sort of "art" that we rarely see in stories. Most stories try to use pleasure as the appeal to the audience. What I mean is that while we are experiencing the story, we gain a sense of pleasure through it, which attracts us to continue. Whether that attraction is through the thrill of action, the calm slice of life scenery or just plain hentai lust. On the other hand, this story has decided to use discomfort to attact us, and we keep reading because we are enjoying that feeling of that "discomfort". It's not the easiest emotion to explain, which is why I end up describing each chapter as "weird" or "Oh Shit!". This discomfort isn't the same as what the Romans got from Gladiator fights or what we feel when we watch SAW, as they produce a thrill which attracts us, instead we are enjoying the feeling of being "trapped" and "pressured", maybe even disturbed. Still, its great when we finish and we can sit back and realize, "Fuck yeah, that isn't me!" Unfortunately, the characters are relatable enough that when we sit back and think about it more, we realize that we see ourselves in them.What I do praise is the way the story is so fast paced, that when we feel trapped because of the characters, we have no time to relieve ourselves before they get into an even deeper mess. Of course, its better to not have to wait for it monthly to fully experience this effect. Things happen in each page, and there are barely any pages wasted on metaphoric dialogue or drawings of the random scenery unless they somehow make a big impact. Big events happen in each chapter and the story moves at an extreme speed. Such pacing doesn't work for all mangas, but for this one, I can definitely say it does.I'm not going to lie, some people are not going to enjoy this. It seems to try to become something deeply psychological, but falls short because of the rather unrealistic personalities of the characters. Still, let me ask you this, do you feel good when you read this? And if no, then why are you continuing?

If this series had ended with chapter 33 I might have considered it to be the best manga I have ever read. The way that tedium and mediocrity were represented, as well as the dynamics between an escapist sub and a genuine dom were really interesting. The supporting characters were fairly well developed. The importance of Baudelaire was really ham-fisted but overall, it helped the reader to be reminded of Takaos' own struggles with acceptance, as well as his naivety and general misunderstandings about literature, sexuality and other topics. I would imagine that this manga sits poorly with some people; it is pretty intense and thematically awkward.

Oh boy, where do I even begin on this one? "Aku No Hana" or "Flowers of Evil" is without a doubt my favorite manga of all time. Shuuzou Oshimi manages to capture the perfect combination of horror, psychological thriller, romance, drama, and coming of age all in one fucked up adventure of 3 (and later 4) well-written characters. This story has the ability to leave you feeling a whirlpool of different emotions and has an ability to attach you to these characters like no other. I'll do my absolute best to write this completely spoiler-free because I firmly believe this is best enjoyed going in blind.      Starting off with the premise of the story, "Kasuga Takao is a boy who loves reading books, particularly Baudelaire's Les Fleurs du Mal. A girl at his school, Saeki Nanako, is his muse and his Venus, and he admires her from a distance. One day, he forgets his copy of Les Fleurs du Mal in the classroom and runs back alone to pick it up. In the classroom, he finds not only his book but Saeki's gym uniform. On a mad impulse, he steals it. Now everyone knows "some pervert" stole Saeki's uniform, and Kasuga is dying with shame and guilt. Furthermore, the weird, creepy, and friendless girl of the class, Nakamura, saw him take the uniform. Instead of revealing it was him, she recognizes his kindred deviant spirit and uses her knowledge to take control of his life. Will it be possible for Kasuga to get closer to Saeki, despite Nakamura's meddling and his dark secret? What exactly does Nakamura intend to do with him?" The remainder of the story follows Nakamura and her newfound toy Kasuga as she attempts to "peel the layers" off of Kasuga to make him realize who he truly is. A deviant pervert.  With a premise like that, you wouldn't believe  this story to having much substance outside of maybe a bit of crude content but Shuuzou Oshimi flourishes in catching the reader off guard and taking them on a dark, uncomfortable journey where our characters continue to fall down a well of emotions and actions you couldn't imagine. The story in all gets a 9.5 out of 10 from me. I think towards the end of the manga, it sorta loses its way for a brief period, almost as if you're reading a completely different story with slightly different characters but it manages to bring itself right back to perfection very quickly.           As for our characters, the story welcomes 4 main characters by the names of Kasuga Takao, Saeki Nanako, Nakamura Sawa, and lastly Aya Tokiwa. Kasuga fits the role of awkward puberty ridden middle schooler absolutely perfectly. He's awkward, sexually confused, head over heels for a girl. Essentially all the qualities a regular middle schoolboy might be experiencing with the exception of one glaring quality, Kasuga is obsessed with books, and this obsession leads to a feeling of superiority over all other beings. Kasuga believes he is smarter than everyone but nobody can quite understand that. Saeki, on the other hand, is almost the polar opposite of Kasuga. A very popular girl with gleaming qualities that sorta lead to this idea that she is the perfect girl. Large friend group, many talents, incredibly smart, and very attractive. She is personified as being the embodiment of perfection for Kasuga, but even she has her own demons. I won't go into Aya's character as she appears much later in the story and her character alone would reveal massive spoilers. Lastly, we have Nakamura Sawa, the odd one out. Nakamura is deranged and seen as almost feral. She is crude, alone, socially unacceptable, and completely out of control. These qualities create an incredibly unique character with the ability to completely warp our other characters perspectives and lives.         The art in Flowers of Evil is astounding. Shuuzou Oshimi has a certain style that just works so perfectly for this story in hand. He's able to draw this incredibly cute almost moe characters but with dialogue completely out of left field. The background images are incredibly detailed and the more horror/psychological parts of the story are drawn in such a detail that leaves you feeling incredibly uncomfortable in all the best ways. The rapid change in style to match the rapid change in the atmosphere in the story is absolutely spot on.         All in all, Flowers of Evil for me at least is the embodiment of what a psychological story should be. It captures the pure essence of every genre included in the story and leaves you feeling completely entranced in the lives of these characters. Not a single moment reading this did I ever feel as though I was bored or frustrated with the direction the story was taking and I believe that is an incredibly difficult task to complete and I absolutely give my solemn thanks to Shuuzou Oshimi for creating this masterpiece. Please read this manga and read it as blind as you possibly can. It's absolutely worth it. 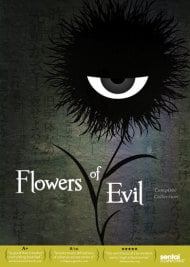