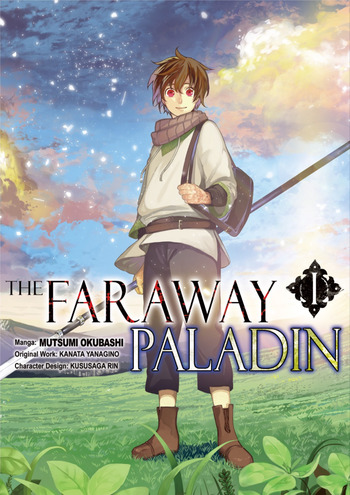 Honestly, there's not much else but a 'feeling' that made me recommend this. "Kamitachi ni Hirowareta Otoko" is a light-hearted, good-feelings-all-around type of story whereas "Saihate no Paladin" has pretty dark undertones. Yet their reincarnated forms give off the same feeling. Both would do anything for the people they care about, are loving and understanding, and boldly walk an honest life.

Other than that the similarities are vague. 'reincarnation', 'fantasy world', 'Loving, caring caretakers that took the main character in despite him not being their own', 'op skills in both mind and body'... There's more than I originally thought, actually. Though most of all, it was the main characters of both stories that struck me. <3 I love them both! Though I have to say Ryouma is obviously my favorite of the two... <3

the characters are really similar yet they both have their own way of thoughts. It's like one person in 2 different world yet they are different.

Honestly, at first I was hesitant on reading The Faraway Paladin but after giving it a try I certainly have no regrets. The Faraway Paladin is such a touching and heartwarming story that forces "invisible ninjas to pop up and chop onions." I definitely recommend giving it a try. I also recommend reading the comments after each chapter. You get to see how many people adore this manga and their humorous comments relating to different events. Well go on, give it a try. It wouldn't hurt. Don't forget to prepare emergency tissues incase it starts "raining".

Both manga gives off 'feel good' sensation of a carefree, kind hearted yet over powered MC that help others around him

Both MCs are reincarnated into a fantasy world. Also, they both met good people to assist them and help them grow. The difference is the 'The Faraway Paladin' grew into a teenage boy while 'By the Grace of the Gods', in manga, the MC is still a child. TFP has a little bit more drama and action while BTGOTG feels fluffier and light-hearted story. All I can say is both mangas are awesome and, because it is on-going, there's cliffhangers and can't wait to know what will happen next.

Ordinary Soldier Dreams of the Past

After a long battle, John Celias, a soldier of the Demon punitive force, sees the hero topple the Demon King at last...and he is defeated by the remnants of the enemy. When John, who should have died in the war, wakes up, he finds that he has become a baby in his hometown... the same hometown that should have been destroyed by the demons. John realizes that he has actually gone back in time and decides to use the fighting prowess and the knowledge he gained in his previous life to change his tragic fate! It's a story of a soldier and his time travel counterattack fantasy!

Both isekai with a good story, lot of weight on friendship and there are some really likeable charakters in both

A lonely boy wandering the Arctic regions of North America meets a wolf, and the two become fast friends, depending on each other to survive the harsh environment. But the boy has a history, and the wolf is more than meets the eye as well …

Ootori Tenma, who lost his parents and was raised by his grandfather’s and grandmother’s friends who are living in the countryside, loses his life at the age of 25. A god of a different world called out to the ghost Tenma. This is a story about Tenma who, is liked by multiple Gods of reincarnation, receives multiple cheats and lives a second life in another world.

A Journey Through Another World: Raising Kids While Adventuring

Takumi gets accidentally killed by the wind god Syl and is reborn and summoned to another world. After giving Takumi his sincerest apologies, Syl grants Takumi with skills and sends him to the world Etelldia that Syl presides over. However, this new world is a vast forest filled with dangerous monsters... In the forest, Takumi finds a young boy and girl who appear to be twins. He is worried about their safety and names them Alan and Elena, and decides to take care of them. He soon finds out to his surprise they are able to defeat a monster with their bare hands. The three of them reach a town, and Takumi decides to register at a guild to make a living. He begins his life as an adventurer while taking care of the two children. An isekai fantasy about an adventurer with two kids!

Reborn as a Barrier Master

At 34 years old, Kubo Tamotsu works at an exploitative company only to wake up one day in an unfamiliar world, reincarnated into the body of a six-year-old. Not aware of his innate “Barrier Master” skills, he finds himself on the slave market, and up for auction! When no one bids on him and he’s queued for disposal, he is rescued in the nick of time by Marquess Basam. He will be raised as the Marquess' personal Barrier Master under a new name, “Linus,” and his talent as a Barrier Master will grow day by day. His troubles never seem to end, as he struggles to survive!

Tenchi Kaito is a rare genius scientist. When he wakes up one day, he has been transferred to another world. Kaito obtains a rare magic called "Creation" that allows him to create things he once saw. With the help of a female mercenary, Kaito lives with her, earns money by using his creation magic, and spends his days in peace and fun, but he gets caught up in various disturbances... Using his unparalleled brain and creative magic, he lays waste to his enemies!